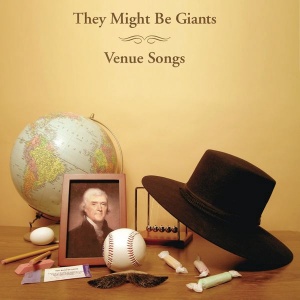 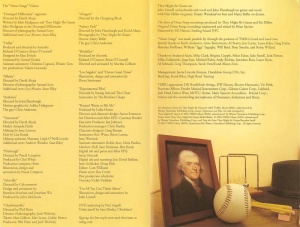 The DVD side includes ten original video clips, as well as colorful narration by former literary agent John Hodgman in the role of The Deranged Millionaire. There will be bonus video material including 'Damn Good Times,' 'Bastard Wants to Hit Me,' 'Experimental Film' (with Homestar Runner), 'I'm All You Can Think About' and more.

On the CD side there is over an hour of music — all for the first time on CD. You will receive all the original Venue Song recordings from the 2004 tour, and a set of live recordings from that tour. The 10 studio recordings of the Venue Songs will also be featured. It also compiles a number of audio rarities from last year including 'Renew My Subscription,' 'Love Is Eternity,' 'Taste The Fame' and more.

Due to copyright concerns, the songs on Venue Songs were titled after the cities of each venue rather than using the venue's names. Similar legal circumstances led TMBG to retitle "AKA Driver" on John Henry one decade earlier.