From This Might Be A Wiki
(Redirected from TMBG Merchandise Store) 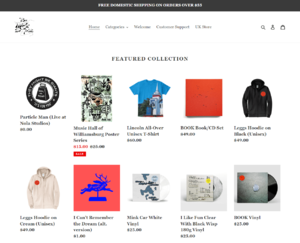 TMBG Shop (tmbgshop.com) is the official home for all They Might Be Giants merchandise, ranging from T-shirts to albums, magnets and books.

Originally selling merch exclusively by mail order catalogs and at shows since the '80s, TMBG opened their first online store at Yahoo Stores in 1998. The store was adorned on its homepage with the tagline, "Check Out These outrageous products which we sell for actual cash money. A better idea is not be had in all the 13 states." It remained in operation until 2010, at which point the store moved to the Bay Shore, NY-based platform MerchDirect, who sold TMBG merchandise until 2021.

In 2021, the store moved again to the Austin, TX-based company Amplifier with a new URL at tmbgshop.com. TMBG also operates a dedicated UK store powered by Townsend Music.

These downloads are only available for purchase directly from the band via TMBG Shop (with many also on TMBG's Bandcamp). Though some have physical releases, they are unavailable on streaming platforms like Spotify/Apple Music, or digital music stores like Amazon MP3/iTunes.

The band began releasing certain albums and EPs only via their merch store in 2018, accompanied with notes such as, "This album is available exclusively from Idlewild Recordings and will not be sold elsewhere and will not be posted to streaming sites."