Uh. This was made first, but someone made another page. So which do we use? -Ecks

Um, did anyone else notice that Asheville is the only venue song NOT in the live section of the CD? Why is this?--2sheds

It's a lot of songs, maybe they just had to cut one for time. --BlarJotunn

As far as I can tell, the version of Asheville on the new CD is not in fact a studio version, but the same as the original. I'm going to change the link to reflect this. — aliste

Should we add pages for the new studio versions of the songs on the DVD? -Ecks

Yeah - that's what we've done in the past. I don't have the DVD/CD yet, so unfortunately i don't know which songs are new versions. Do you mind creating the new versions, or at least creating the links on the venue songs dvd/cd page? 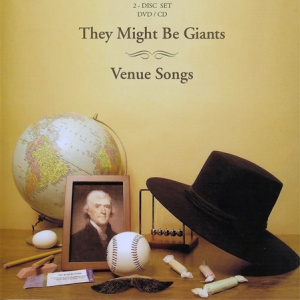 Perfect for iTunes. Thanks! -Ecks

You know, you could just use the image from the original release without the DVD. Speaking of which, is ti me, or has there been a flood of albums released lately that have the dual disc feature? — User:ACupOfCoffee@ 19:03, 24 Jan 2006 (EST)

Does anyone think that the Venue Songs set should have been released in a 2-CD case rather than a DVD box? (I feel it's more CD than DVD). Some other artists who have released CD/DVD combos have released it in both DVD and CD sized cases (example: Eric Clapton's Songs for Robert J. - and I think the DVD style version has been discontinued now) -- MooseBlaster 09:56, 4 May 2007 (UTC)

Am I the only one who is bothered by the fact that not enough people have given Venue Songs a rating on IMDb for it to deem an average score? This marvelous work deserves better! Also, I don't think Them Ain't Big Eye Ants even has a page.--MidoFS (talk) 07:50, 15 November 2016 (EST)