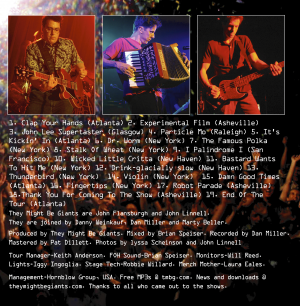 Almanac is a live album released digitally through the TMBG Download Store in December of 2004. The album was made available with no prior notice that it was going to be released. It is no longer available through the Download Store, nor through any other service.

All songs on the album were taken from performances during the Spine On The Hiway Tour, mostly from the tour's latter half. Other live recordings from the tour were released on The Spine Hits The Road and Venue Songs.