This page is for the book. For the song of the same name, see Kids Go! (Song). 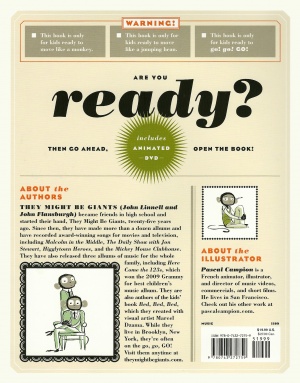 The back cover of the book.

Although the set is billed as a book and DVD combination, the book is the main focus of the set. The book is based on the lyrics to the song Kids Go!, a song that TMBG originally created in 2008, for a PBS Kids campaign that encourages an active lifestyle. Billed as "A dazzling four-color sing-along book", it clocks in at an accomplished 48 pages. Both the book and the animated video were illustrated by Pascal Campion, who has created several animated videos for TMBG in the past. Melissa Jun provided art direction and designed the book.

The book was released by Simon & Schuster, who previously had published TMBG's other children's book-and-CD set, Bed, Bed, Bed and for whom TMBG announced in September 2004 they would be releasing another book or two.