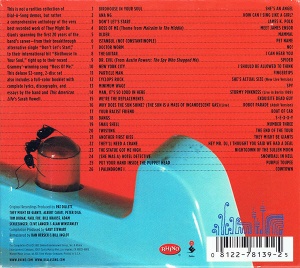 Dial-A-Song is the first and only collection to span They Might Be Giants' entire career. Compiled by the band's John Flansburgh, this two-disc anthology gathers 52 tracks from albums, EPs, singles, and soundtracks — including hits like 'Birdhouse In Your Soul' and 'Boss Of Me' (from TV's Malcolm In The Middle) — plus four previously unreleased tracks.

Millions have been introduced to the clever, eccentric pop of They Might Be Giants with 'Boss Of Me,' the band's theme song for the hit TV series Malcolm In The Middle. They Might Be Giants' colorful history actually stretches back more than two decades. Childhood friends John Flansburgh (vocals, guitars, keyboards) and John Linnell (vocals, accordion, sax, keyboards) , came up through the early-'80s New York performance scene, and founded Dial-A-Song, a novel means of exposing their original material (folks can call a number and hear songs played on an answering machine).

The Giants' eponymous 1986 debut and its follow-up, Lincoln, were both major hits on college radio and MTV, where their videos for 'Don't Let's Start' and 'Ana Ng' aired frequently. Their breakthrough album, Flood, went platinum with the international hits 'Birdhouse In Your Soul' and 'Istanbul (Not Constantinople)' In the mid-90s TMBG expanded to a full band and continued to record and tour extensively. The band released the critically acclaimed children's album No! earlier this year.

Flansburgh remarked about the compilation's title in a April 2002 newsletter, stating that virtually all of the songs featured began on the Dial-A-Song service, though actual Dial-A-Song recordings would not be featured. He teased the possibility of an actual Dial-A-Song compilation to be released on Idlewild Recordings but warned, "THAT set would have a much smaller audience, perhaps just y'all and us, and while it is being discussed as a specialty release for Idlewild, like our Battle of the bands project, breath-holding is not encouraged." Such a release never came to fruition.