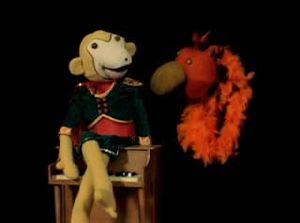 Deeply Felt Puppet Theater is the puppet act put on by Robin Goldwasser and another mysterious puppeteer (possibly Jonny Cragg) at TMBG's kids' shows. The group is made up of Gloria Felt (the parrot), Jebediah Deeply (the monkey), and Pearlie Poodle. The puppets themselves were designed and created by Robin. In a 2022 Tumblr post, she confirmed that the puppets were made of "a mixture of vintage and new fabrics (mostly wools) and trims. And always buttons for eyes."