Gigantic (A Tale Of Two Johns) 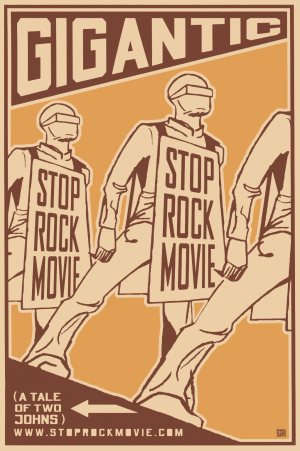 Gigantic: A Tale of Two Johns is a rock documentary about They Might Be Giants, directed by AJ Schnack and produced by Shirley Moyers and Bonfire Films Of America. It was filmed in 2001, released in limited theaters in 2002, and finally released on DVD in 2003.

The film contains concert footage, interviews, humor, animation, coffee, humor, lyric readings, people wondering about the subject matter of their lyrics, information on our eleventh and sixteenth presidents, excerpts from the Flood Promo and Rabid Child video, Linnell's son Henry, a performance on "The Tonight Show" accompanied by Doc Severinsen, early influences, humor, early performances (at the Darinka: A Performance Space, for instance), coffee, an inside look at the "Dial-A-Song" studio, the notorious "Gloria," interpretations of Particle Man, John's take on John (and vice versa), fan stories, behind the scenes of Man, It's So Loud In Here, TV appearances, excerpts of songs written for movies and television...and you should also know there is a lot of humor! And coffee!

Songs Heard Or Mentioned In The Movie Or Extras[edit]