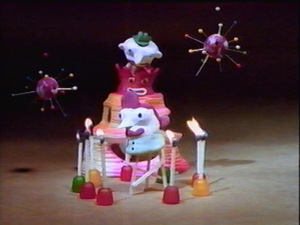 Sculpture representing the song from the Apollo 18 promo

I always think of the one where the mother complains about - I can't recite it for you, but it's the one where she's complaining that he feeds crumbs to the bugs and he never gives anything to his mom. [...] I guess I must have written ["I Palindrome I"] after I saw Hal. It starts with the line "Someday Mother will die and I'll get the money." Except for the fact that Hal's mother didn't have money, I think that would fit in with his work.