This article is about the phone service... 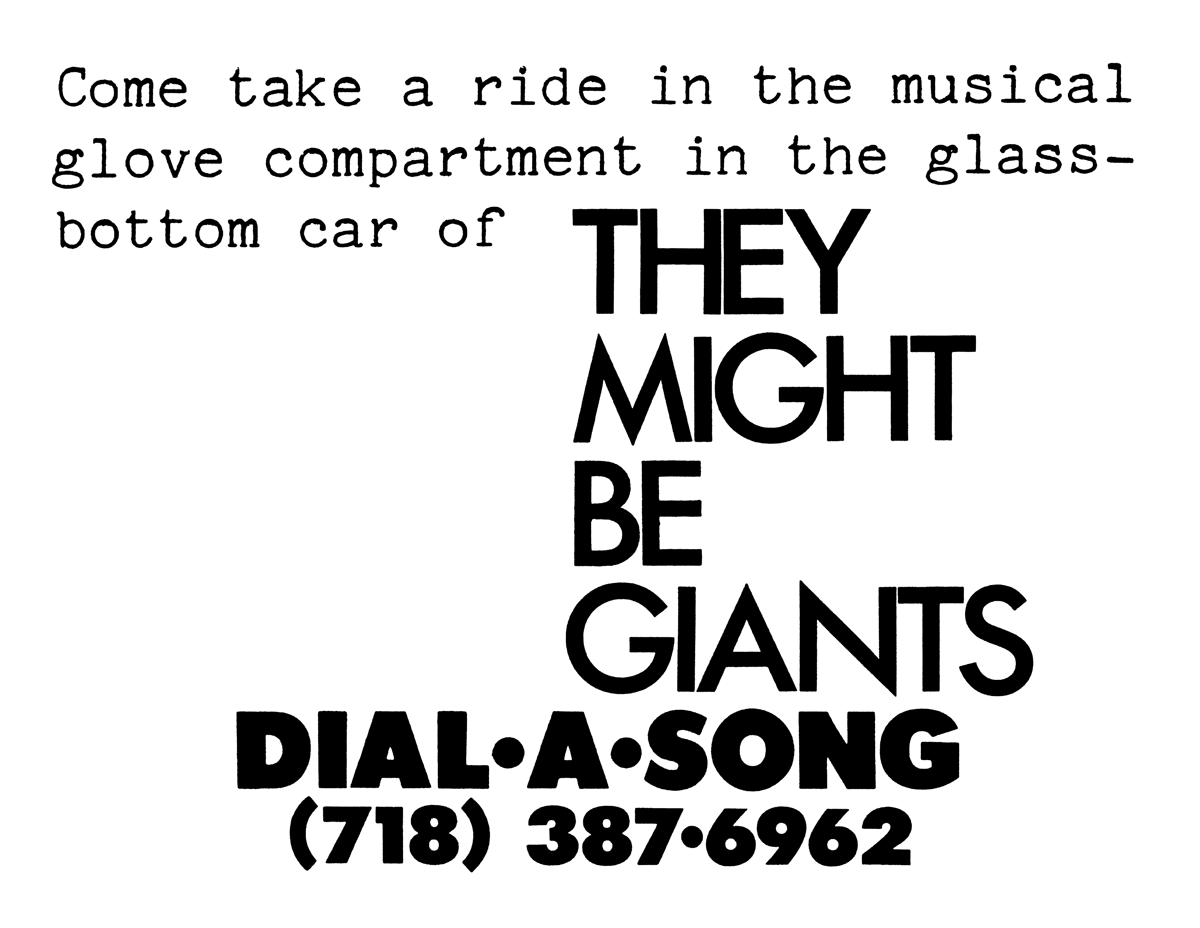 A promotional card for Dial-A-Song

Dial-A-Song is a telephone service operated by John Linnell and John Flansburgh of They Might Be Giants that originally ran from 1983 to 2006. It returned in a new form for the years of 2015 and 2018.

The service was originally available as "a regular phone call to Brooklyn", at the number (718) 387-6962. Dial-A-Song consisted of an answering machine, which would pick up calls and play back a song in the place of an outgoing message. The model of answering machine employed changed throughout Dial-A-Song's tenure, but most machines played back the message via a cassette tape. This system made it easy for the Johns to record demos, jingles, or even previews of studio tracks (often with a spoken message by John Flansburgh at the end) onto cassettes and then queue them into the machine. Dial-A-Song was updated often, although many tracks stayed in rotation for a while after their initial appearances.

Although it is not clear whether the band always intended for Dial-A-Song to run as long as it did, it eventually helped them secure a general audience and a loyal following. The novelty of Dial-A-Song also attracted some minor media attention for the band. The service has become a staple of the culture surrounding TMBG, even after its discontinuation.

In both 2015 and 2018, the band restarted Dial-A-Song, focusing on distributing new music on a near-weekly basis for one year each. New songs were made available through various online mediums including DialASong.com and a toll-free phone number, (844) 387-6962. 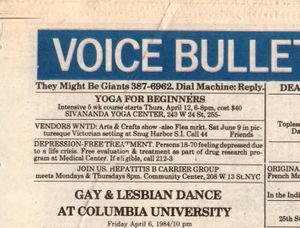 Dial-A-Song, or, as it was called in some early promotional materials[1], Dial-A-Machine, began in November 1983 when the Johns were forced to take an unexpected break from live performances. John Flansburgh's apartment had been burgled, and John Linnell had broken his wrist in a bicycle accident. In order to avoid losing momentum, they began distributing music through Dial-A-Song, which was apparently just Flansburgh's home phone line. The service's name is based on Dial-A-Prayer, a Christian phone service that similarly played back inspirational messages through an answering machine.[2] For nearly a year after its creation, the number was at the 212 area code, as the 718 area code covering Brooklyn and other boroughs was not created until September 1984.[3]

According to John Flansburgh, Dial-A-Song made TMBG's music more accessible to fans who were not interested in the punk rock scene of 1980s New York City performance art spaces. However, at the start, the band was apprehensive about associating their name with the service. In order to save money, Flansburgh would advertise Dial-A-Song in the "personal" section of New York's Village Voice, because it was cheaper than placing a "commercial" advertisement. However, fearing that he would be penalized for doing so, he did not include the name of the band in early advertisements, and the outgoing messages of early tracks made no mention of the band. Once the band began to release music commercially, they also advertised the number on the back covers and liner notes of their releases. The 1985 Demo Tape and Wiggle Diskette both carry the number, in addition to many earlier demo tapes, which had the number written on the cassette labels.

Flansburgh has also recounted that in the early years, he would seek feedback from the messages left on the answering machine. The infamous "Untitled" is a recording of a message left by a very confused woman and her friend on a third line. Another message, "Fat Danny Akroyd", compares John Flansburgh to comedian Dan Akroyd. Despite such mishaps, the opportunity for fans to interact with Dial-A-Song also yielded some more favorable results. For instance, the backwards speech at the start of "I'll Sink Manhattan" is an appreciative message from the New York Police Department.

As the band gained a following and secured a record deal with Bar/None, they continued to share music through Dial-A-Song. It was often considered to be a somewhat intimate experience, as the answering machine could only take one caller at a time. Some tracks were demos of songs that would go on to appear on studio albums. Other tracks were exclusive to Dial-A-Song, and have not appeared outside the service. In the mid-1990s, fans collected recordings of known Dial-A-Song tracks into bootlegs. Two of these bootlegs, Power Of Dial-A-Song and Power Of Dial-A-Song II, are still well known among fans, despite their relatively low fidelity (having been recorded from a cassette broadcast over a telephone line). In 1992, John Linnell discussed the service's low-maintenance nature in an interview with Arthur Durkee:

Dial-A-Song will never die. In fact, I'm sure long after we've broken up, stopped making records, done all that stuff, that we could still do Dial-A-Song. It's so easy. It's just a phone machine. Doesn't require any work. I guess the work is doing the demo for the songs that we'd be making anyway. They don't have to sound okay, they just have to be audible: 'cause they don't sound okay once they go over the phone line anyway.

Many TMBG releases—up to the early 2000s—bear some mention of Dial-A-Song, often with little information besides the service's name and an occasional slogan or phrase. For international releases, the number included the country code for America, 0101 or 01. The band also occasionally referenced the phone line elsewhere, such as in the name of the compilation album, Dial-A-Song: 20 Years Of They Might Be Giants. Flansburgh is shown recording an early demo of "I Can't Hide From My Mind" in Gigantic.

To supplement Dial-A-Song, the band began dialasong.com, a Flash site that let visitors listen to various TMBG demos and other songs.

In the mid-2000s, due to technical failures, the band started having difficulty maintaining Dial-A-Song. The answering machines used were generally unreliable, and had to be replaced frequently. Despite the band's acquisition of a new vintage machine in April 2006, the stress placed upon the answering machine in addition to its age caused excessive wear, and the machine broke down soon after. The final song that appeared on Dial-A-Song was a demo of "We Live In A Dump". On November 15, 2008, the Dial-A-Song number was officially disconnected.

Because the band had started taking advantage of the Internet to share demos and one-off tracks, they grew less invested in sustaining Dial-A-Song. In addition to dialasong.com, Free Tunes and the They Might Be Giants Podcast achieved essentially the same goals as Dial-A-Song, both featuring new songs and other rarities for fans to hear. In January 2013, the band also introduced a mobile app, which was expected to take over where Dial-A-Song and the podcast had left off. However, the app has not featured any new material, and instead behaves more similarly to the TMBG Clock Radio.

Some fans of the band have attempted to continue the "spirit" of Dial-A-Song by purchasing the number and releasing their own demos through the phone line. However, these attempts have generally been unsuccessful and short-lived. A This Might Be A Wiki admin made an attempt to briefly imitate Dial-A-Song through Dial-A-Wiki, which used an original number and Google Voice to play old TMBG demos, but this ran for only a brief period in 2010.

In October 2014, They Might Be Giants posted a teaser video for the triumphant return of the Dial-A-Song website in January 2015. The description of the video reads, "For 2015 They Might Be Giants will be posting a new song online every week at dialasong.com. Yep. Exactly."

The new incarnation of Dial-A-Song released one new song a week throughout the year. The songs were distributed via through both the new toll-free number (844) 387-6962 and online streaming on the band's ParticleMen YouTube channel, where each song had an accompanying video. MP3 or WAV files of the songs were also emailed to subscribers of a service known as Dial-A-Song Direct. Most of the songs from the 2015 service were compiled onto three albums: Glean, Why?, and Phone Power.

In September 2017, the band announced that Dial-A-Song would return in 2018 with "brand new songs on the first and third weeks of the month for the first half of the year, with tracks from the brand new album getting the spot light on the second and [fourth]...Either bi-weekly or weekly if we can handle it."[4][5] Though this pattern was not strictly followed, there was generally a new video each week except for the month of August. Songs not on I Like Fun from 2018's iteration were compiled into the albums The Escape Team and My Murdered Remains. 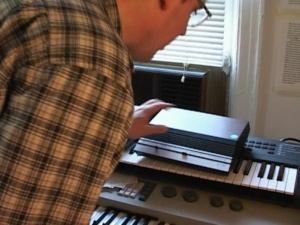 Due to the temperamental nature of tape-based answering machines, the band went through a few different makes and models throughout Dial-A-Song's lifetime. From 1983 to 1998, the band used cassette answering machines. In 1998, they made the switch to a digital unit. Due to frequent crashes, TMBG returned to their traditional systems in 1999.

In the summer of 2002, both the Dial-A-Song answering machine and its backup apparently melted in Flansburgh's apartment. Fans responded by sending new models to the band, and in April 2003, Dial-A-Song returned via a Record-A-Call 675, which the Johns purchased after a fan found it on eBay. TechTV provided TMBG with a new computer system for Dial-A-Song in the following year, but technical difficulties brought the system to an end by 2005. In 2006, the band reported their acquisition of a Record-A-Call 690 in a newsletter in April.

Throughout its history, Dial-A-Song has had various slogans attached to it. These include:

These had some variations, including "Still free, often busy", and the more honest "24 hours a day". Listings of the number on releases sometimes also included gentle encouragements, such as "Don't be afraid" and "Dial-A-Song awaits you"—"At no extra charge".

Some new phrases were introduced for the 2015 revival:

† These are anagrams of They Might Be Giants (some by John Linnell), from the old tmbg.com

Over 100 songs and other recordings are known to have been featured on Dial-A-Song during its original 23-year run from 1983 to 2006. These included demos or early sketches of songs that would be featured on albums, one-off tunes, "theme songs" for Dial-A-Song itself, and messages to the caller, among other things. The band has indicated that all of the tracks on their early albums were "filtered" through Dial-A-Song at some point. Because the band often shared unfinished or half-imaged material through Dial-A-Song, it is possible to observe how some songs, such as "Rat Patrol", evolved before they were released—the demo of that song, which was sung by Flansburgh and not Linnell, has a vastly different melody than the album version.

The 2015 and 2018 revivals of Dial-A-Song have featured large amounts of new material from the band, including a new song every week for a total of 52 songs in 2015, and dozens of additional new ones in 2018.