From This Might Be A Wiki
(Redirected from More Murdered Remains) 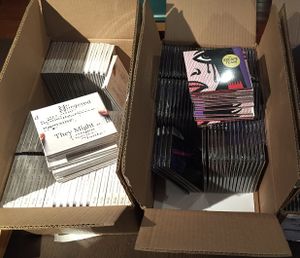 My Murdered Remains is the 21st album by They Might Be Giants. It consists of new songs first released on Dial-A-Song in 2018. CD/digital versions include a 16-track bonus disc, More Murdered Remains, with songs from both the 2015 and 2018 iterations of Dial-A-Song.

Like The Escape Team, My Murdered Remains is available on CD, vinyl and download on Idlewild Recordings directly from They Might Be Giants via their merch store, but is not available on streaming services such as Spotify. Though the CD edition includes More Murdered Remains as a bonus second disc, the vinyl edition only includes those songs via download code.

In summer 2022, a vinyl repressing of the album was sold with side 2 of The Escape Team mispressed instead of side 2 of My Murdered Remains. The edition was sold briefly on the TMBG Shop and removed after the issue was reported.