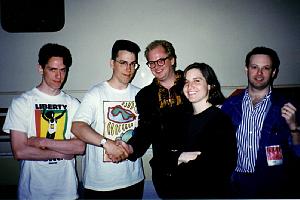 Susan Drew (also known as Sue Drew) was an A&R (artists and repertoire) representative for Elektra Entertainment. She worked with Peter Lubin to help sign TMBG to the label in 1989, based on the success of the band's first two albums, released on Bar/None.

Drew was interviewed by AJ Schnack for the film Gigantic, and discussed her involvement in getting the band signed. She pushed John and John to use a backing band for their live shows as opposed to reel-to-reel tape recordings, and eventually in their studio recordings as well. In an interview not featured in the film, she also discussed her arrangements to have Elvis Costello produce Apollo 18, which the band declined.

Drew's departure from Elektra precipitated a series of events that would cause the band to leave the label in 1996, after the release of Factory Showroom.

She later served for a time as ASCAP's Vice President of Membership - Pop/Rock, starting in 2009.[1]