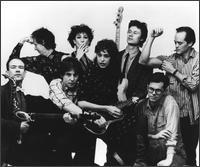 The Ordinaires were a nine-piece band that included Benjamin Bossi, Robin Casey, Fritz Van Orden, Barbara Schloss, and Garo Yellin, all of whom are credited on the song "Kiss Me, Son Of God" from Lincoln. The group also included Kurt Hoffman, who would later be a part of TMBG's backing band. The Ordinaires broke up in 1991, but not before releasing a couple albums, including one called One on the Bar/None label.

When asked in an interview with Myke Weiskopf how TMBG met The Ordinaires, Bill Krauss said:

We met the Ordinaires at 8BC, which was run by a couple of guys named Dennis and Cornelius. It was the greatest club in the world for about two years. They had something like 3000 performances in two years. It was running non-stop. They had plays in the afternoon and performance art at dinner time, and bands at night. It was just a wonderful time. It may have been the first time we played there. People liked to book TMBG with the Ordinaires because there were nine people in the Ordinaires. Logistically, it was really easy, because to have another full band when you had the Ordinaires on stage meant moving a whole lot of equipment. We did some shows at the Pyramid for them and the Village Gate. In the very earliest shows, the Ordinaires had been around a bit longer and had more of a following, so we opened for them. Later, they opened for us. When we started doing Village Gate shows, we brought them along because they're friends. When it was time to do recording, bringing them in to do 'Kiss Me, Son Of God' seemed like a natural idea.

Their name may appear to be a pun on the classic country group, The Jordanaires, who, when not making their own records/appearances on TV shows, provided backing vocals for many records, including those by Elvis Presley, Patsy Cline and Ween (on their 12 Golden Country Greats album). However, the name is actually a simplification of Vin ordinaire, the French term for table wine, and also a pun on the name of band member Fritz Van Orden. It seems Kurt Hoffman's French-language outings have grown more extensive in recent years, as he appeared as an opening act for TMBG in 2007 with Les Chauds Lapins ("The Hot Rabbits").