From This Might Be A Wiki
(Redirected from Here Come The ABCs!)

To accompany the CD, the band commissioned several artists, such as Divya Srinivasan, The Chopping Block, and others to create videos for the DVD. The DVD also introduced children to The Puppet Johns, who appeared in between-video segments and videos, and the Deeply Felt Puppet Theater. The music videos began airing on Playhouse Disney (and allegedly PBS Kids as well, although any proof of that other than a brief mention from the band has yet to surface) in January 2005 until about August or September of that year. Bonus videos were included on the Amazon.com version of the DVD, and various bonus songs were included on Amazon.com and Best Buy versions of the CD. 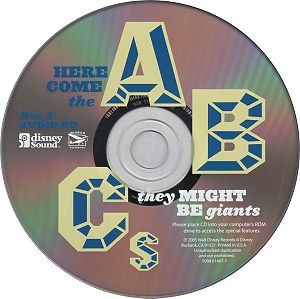