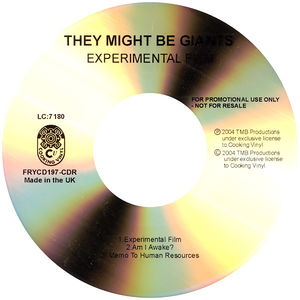 The single came with a sticker that reads:

They Might Be Giants bring on the rock in a way they have never brought in before with the release of their tenth full-length album, 'The Spine'. The first single from the LP 'Experimental Film', is a classic piece TMBG power pop. The singular sound of Linnell & Flansburgh's work is back. The solid song-craft, lyrical curiosity, and hyper-inventive style expected from the Johns' are elevated to new height. After selling over 3 million records, winning a Grammy Award and having their influential status confirmed with the acclaimed recent documentary Gigantic, 'The Spine' is testament to how much the band continues to evolve and flourish.***STOP PRESS*** They Might Be Giants play The London Astoria September 9th