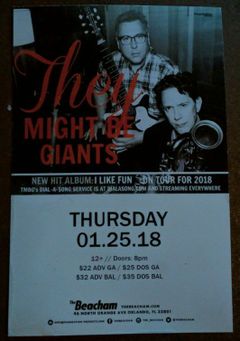 My third show! This time I brought my friend Erin who definitely enjoyed himself. He bought Flood back in the day and was especially impressed by their rendition of "Twisting". After the show, he texted me, "Show was awesome. Those guys--definitely musicians. Shit gets real when a band has a contra-alto clarinet and accordion on stage." He told me a couple days later that he still had "Birdhouse" and "Whistling" stuck in his head.
The tickets and all pre-show information listed it as a 14-and-up show. However, some kind of bad thing relating to kids had happened very recently at the venue, causing the age limit to go up to 18. This forced security to go down the line forming outside and tell parents with kids that didn't meet this new age limit that they wouldn't be let in. A few people left very angry and disappointed and I felt really bad for them. One group as they went by said, "Well, just let your freak flag fly higher!"
I got a great spot up at the front-left with no one in front of me, mainly thanks to a burly security guard who kept anyone from crossing into the 5 ft. space between the stage and the audience. For the most part the crowd was well-behaved, but after the first set, a guy came up behind me and started randomly shouting "SPIDERRRR! HE IS OUR HEROOOO!" probably like 10 times for the rest of the show. It was definitely irritating, but it wasn't worth saying anything. He did have some "words" with the guard a few times that somewhat distracted me from the song or banter. Otherwise, though, things went on without incident. In fact, during the long improvised outro of "Spy", the guard actually turned around, looked up at the stage, and said, "What the hell is going on up there?!"
It probably meant nothing, but Marty was wearing the same shirt for this show as the last time the band was in Orlando. Also, Danny wasn't wearing his traditional red pants, they were just standard black. Incidentally, I happened to see him walking outside after the show and complimented him on the band's performance, and he seemed appreciative.
A professional photographer was shooting the band during the early part of the show. Flans noticed this and eventually invited him up on stage where he got a really cool shot.[1]
There was some quality banter this time around. Both Johns were in excellent spirits all night and were visibly enjoying putting on the show.

This was my first time seeing TMBG live! It was an amazing experience. My dad and I got there at about 7:15, so we were waiting outside in the cold for a while, but the couple who were with us in line were lovely company, so the wait in line was actually a nice experience. TMBG fans seem to be pretty cool and interesting people.

The concert exceeded my expectations. I was a little worried that I would be so used to the track versions of all the songs that I wouldn't like how they were played live, but it didn't bother me at all. The only time the live performance was disappointing was when trumpet or violin parts were played with an electric guitar, but I can understand why they did that.

I actually liked the way that they did some of the songs better then the originals. Fingertips is one of my favorite things they've ever done, but to watch them make all of the transitions live, with different colored lighting for each song, was really cool. More importantly, at the end of I Walk Along Darkened Corridors they finished off with a kick-ass instrumental that really did the song justice. Also, I was happy to finally see the famed improvised ending of Spy, which lasted about four minutes. Both Johns took turns in pointing to different members of the band (and the audience) which created a pretty neat display. Linnell chopping at random keys on the keyboard was especially amusing.

It was interesting to see how much more vocal Flansburgh was than Linnell during the concert: for some reason I expected it to be the other way around. Linnell stayed pretty quiet the whole time and was content with just playing the music, while Flansburgh was the real showman in between songs. Flans always had a joke up his sleeve, half of which were about Microsoft Word's Clippy, which was kindof weird, not gonna lie.

Marty Beller was also fun to see live. He was smiling most of the time while he was drumming and was really into it. He also came to the edge of the stage to do some autographs after the show, and I got a shirt that I bought there signed--a wonderful new keepsake!

I just recovered some notes I made about this show - it was a busy winter and a terrible spring, what can I say?

As usual, the show was amazing, though I was disappointed there were no horns for this show, as Flansy had Tumblr'd and Tweeted about horns from the start of the tour.
Linnell was especially vocal and interactive that night. Much more so than I ever recall seeing him. Addtionally, in many of recent interviews with both John's, he has just as much (and at times more) to say as Flansy! He also seems to be outwardly happier and jovial compared to what I recall of him in the past. I was glad to see that.
After three shows together, my friend Dave finally got at set list and I'm still trying to get a drum stick or skin from King Marty ;-)
See you guys next time!