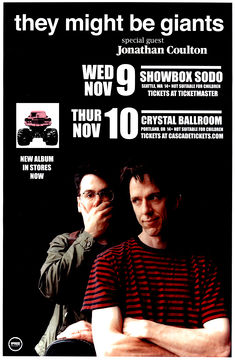 They Might Be Giants
— with Jonathan Coulton opening —
Crystal Ballroom in Portland, OR
November 10, 2011 at 9:00 PM

First off, the setlist was almost as perfect as you can get. Johnathon Coulton kicked off the show, and did a great job of pumping everybody up. I ended up pressed right up to the stage, Figured it'd be incredible to see Marty the whole time. Once They came up, I realized I wouldn't only see Marty the whole time, as Flans and Danny would be standing scary close to the edge of the stage half of the time. The Crystal Ballroom made for a great concert too, the floors flexing with the beat. As far as I know, they didn't do a signing after the show, but I'm not complaining about anything. Battle For The Planet Of The Apes was great as always, and the "drunks" were the apes, which made it just a tiny bit funnier than expected.

So I have to say, out of the 3 shows I went to this one was definitely the best. Other than "Don't Let's Start" there were not any additions to the setlist but god what an addition that is. And The Johns just seemed happier and more into it in general--Linnell in particular was very smiley and excited. It was a sellout crowd and the Crystal Ballroom is a very nice club so that could've had something to do with it. Or maybe they were just in good moods that day. Whatever the reason, it was totally contagious, and I found myself having a lot more fun too.

Rather than "Estrogen, estrogen, and more estrogen" the heat and light of the sun were caused by the nuclear reaction between "the letter P, the letter D, and the letter X." Flans also didn't do the "Girl you know it's true" during "I'm having a heart attack." Maybe it suddenly occurred to him that he's been doing those bits for TEN YEARS (though, to be fair, they do still get good crowd responses).

After "Fingertips" Flans said that having a wireless mic is "a gateway drug" and totally changes the style of the shows they do. Then, keeping on the "drugs" theme, he said he'd had an Ambien and slept for 14 hours.

JL: Yeh, I saw you walking down Burnside with no shoes on.
JF: I took a long stroll, I made some new friends, and then I woke up.

Then, pretty much the best exchange I have ever witnessed between The Johns in my life took place:

JF: What did you do today, John? Did you get out at all?
JL: Yeh, I went to the bookstore across the street. *lots of cheers* That's not something that happens very often. BOOKS! YEH!
JF: FUCKIN' BOOKS!
JL: *does dorky things with his arms and makes ridiculous faces in what my friend Ben described as "his frat boy impression"* FUCKIN' BOOKS! YEH! I'M NOT WEARING A SHIRT IN MY MIND!

OH MY MOTHERFUCKING GOD I CANNOT EVEN TELL YOU HOW MANY TIMES I DIED OVER THIS. Flans then introduced the next song ("Old Pine Box") with "This song is also about a guy who is not wearing a shirt in his mind."

Flans said they've been on the road long enough at this point that "we can't remember what day of the week it is or the difference between clean clothes and dirty clothes." Then he explained how normally they have to split up the audience for the next song but "since the Occupy the Crystal Ballroom movement has begun it's already split up for us." There was a divider area where the bar was. He said that part, the right-hand side, was for bringing "horses and battering rams" through. Then he said he wasn't sure what to do with the people in the balcony, with their "bourgeois chandelier," and Linnell said, "They're the 1%."

So then they did the song. After it was over Flans declared it a tie, which he insisted "never happens, you can check the They Might Be Giants wiki page." Well, I would like to state for the record here on the wiki that that is bullshit cos it happened just 4 days before in Spokane, SO THERE. Still, hearing him mention the wiki was awesome and Ant and I both yelled our approval.

John was then saying something about how the whole show was heavily programmed and "everything I'm saying right now is timed to the light show." Then Flans said, in a very halting way, "Our minds. . .work like Teleprompters. I am. . .William Shatner." Oh Flans.

While explaining Album Raises New and Troubling Questions Flans mentioned "Tubthumping." A few people cheered, but he explained that they wouldn't be playing it because "it eclipses the response to our entire life's work."

At the beginning of the Avatars bit, John's said he "would like to remind everyone that flash photography of video screens is pointless," and Flans's said that is because they're vampires and that this means all the ladies should get to know them. He also said that The Johns are being "shunned" by them and they both turned their backs on them.

Right before the end of the main set, Flans did the thing again where he said they were making up nicknames for everyone in the audience. He dubbed someone up close "Pops," and then asked John to think up one for someone else. John's total lack of improvisational ability apparently extends to making up nicknames cos he seemed sooooooooo thrown off by this, it was THE CUTEST DAMN THING. He was like "The guy with the sunglasses and the black hat?" and was totally stalling and then the guy apparently started juggling cos Flans was like, "Oh my god he's juggling! We're gonna call that guy Damn." Then, like a solid five minutes after Flans had asked him, John pointed at someone and said "Teacup!" and I was like "It took you that long to come up with a random object, really John?" Adorable.

The encore started with duo "How Can I Sing Like a Girl?" again and then John said, "We got a request for some old shit" AND THEY BROKE INTO "DON'T LET'S START" AND ALL WAS PURE AND BEAUTIFUL AND RIGHT IN THE WORLD FOR A FEW MINUTES. I was so, so, so happy. I couldn't even believe how happy I was. He did the stretching out "everybody diiiiiiiiiiiiiiiies" instead of completing that line thing and then again on the "IIIIIIIIIIIIIII" and then "don't want to live in this world" crammed in quickly at the end. And he seemed very happy. But not as happy as I was.

John was super-super-bouncy during "The Guitar" and it was SO FUCKING CUTE. He had been for just a minute a couple of times earlier but he was for, like, the majority of that song. CUTE CUTE CUUUUUUUUUUUUTE.

Flans said he and Marty would be handing out the window-clings after the show, and made some comment about how he's been "married to my wife for 150 years," whatever that means.

After the show my throat was pretty sore--I think like 75% of that happened just during "Don't Let's Start." I was trying to not sing too obnoxiously loudly for most of the show but when that rolled around I was like "FUCK IT, IT'S FUCKING 'DON'T LET'S START,' I AM SCREAMING MY HEAD OFF." So I did.