I am Quinn. I run Museum of Idiots (updated September 23). I'm just a teensy bit obsessed with Mr. Linnell. My unnecessarily detailed explanation of how I became a fan/fell in love with John is right here. I trade bootlegs. I'm also in charge of Cowtown.

I have three TMBG tattoos!

I got this one on my right leg for John's 51st birthday: 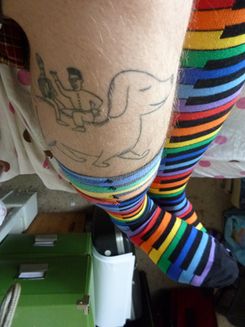 I got this one on my left arm on the 10th anniversary of the day I fell in love with him:

I got this one on my right arm on the 13th anniversary of my first show: 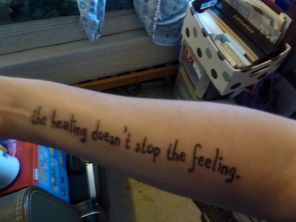 Other TMBG things I do: I have a TMBG/John fanzine called This Could Lead to Excellence or Serious Injury. I sell issue of that and also TMBG buttons in my Etsy shop. I've got a Tumblr where I post John gushing, rare mp3's, John gushing, videos and pictures, AIM quotes I find amusing, John gushing, and miscellaneous TMBG goodness. Oh, and John gushing. I also mod Little TMBG Things. I have a Youtube channel where I post all sorts of TMBG videos. TMBG pages I run on Facebook include John Linnell in Glasses, Dial-A-Song, Direct from Brooklyn,Gigantic, Sapphire Bullets, and They Day.

Other stuff: I have in Seattle, AKA the awesomest city ever. I have a sweet kitty named Smokey. I write poetry and fiction and do a couple of other zines. I have an English degree from Smith College. I do a lot of film photography with weird cameras (like John!)

The Absolutely Neverending List of Things About John That are Adorable, Sexy, or Just Generally Completely Amazing[edit] 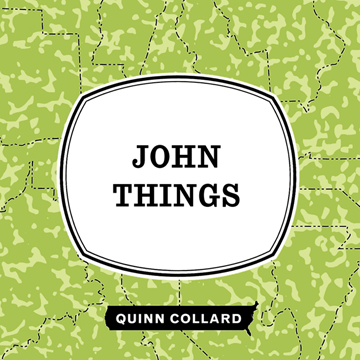