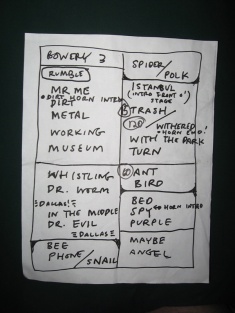 Some shows are good, others great and then there is this one. The Velcro Horns join the band for what has to be one of the best shows in recent TMBG history. An amazing set list featuring all sorts of tunes that have not seen the sweet light of day since the 90's. The recording really came out great - our new FOH guy Adam did a bang-up job in capturing this show in all it's glory. While the nerves were present during sound check - the show was all bones. The band sounds fantastic and the horns punch up the jams in a way that only they can. This may be my favorite version of Spy we've ever recorded - a really interesting combinations of sounds and textures with Tambo Man making an appearance at the end.

An extra long set to celebrate our third appearance at the Bowery. How great is it that they have all sold out! We feel fantastic about that and thank everyone who came out and our apologies to those who were left out the stifling Delancy heat, unable to get in. I'm posting the entire version of Whistling In the Dark as a sample - as I think it really embodies the whole extra - bonfire greatness that was this show.

Totally awesome performance, with each member in completely tip-top shape, along with Stan, Dan and the Loveman on horns. The band came on dressed in suits (Flans- black, Linnell- brown, Miller- dark grey, Weinkauf- maroon, Marty- white) and ties, which was a pleasant surprise. With the Dark's full-band full-song premiere was awesome, and little additions to stuff like horns in Take Out the Trash were great. Linnell up there center-stage and almost alone singing Bed Bed Bed Bed Bed was a truly awesome moment. A bunch of these songs hadn't been played in over two or more years, so seeing them revived for the night was sweet. And I had great times before/after the show with Cubeclub, Teddyleevin and HeyErikLeafinson (!!!). And some other folks. A splendid time was had all around. (Oh, and The Last Car were completely awesome, too, and I picked up their CD/food baggie combo afterwards.)

This show, which will forever be known as my first TMBG show, was amazing. I had a fun time meeting CapitalQ and we had a wacky, zany, off-the-wall moments getting to the venue. Now, the fun parts. The show was great. The band was freaking hilarious inbetween songs ("and on the drums, Marty "on the Drums" Beller on the drums") and Phone Calls From The Dead was awesome. Flans' SNL/Lorne Michaels call out during Put Your Hand on the Computer was funny mcfunnystein. The band jammed at the end of Spy and it was amazing. It all abruptly stopped and Flans said "Let's play Mr. Tambourine Man." And, that they did. The horn solos in Istanbul were amazing. The whole show, amazing. I met fun people, I had a fun time, and I can't wait for next week.

Truly amazing show, definitely in the top 3 (of 39). It was originally billed as the 80s show, and it started out that way, but then they actually played more 90s songs than last week. The horny sets were great, and the first ever complete performance of With The Dark was probably the coolest thing I've ever seen live (Flans needed a cheat sheet to get through it, and after it was finished, the band was ready to take a nap). Withered Hope and Take Out the Trash are also substantially improved with the horns. Seeing John Linnell in frontman mode for Bed (which was being recorded as a bonus track for Here Come the 123's) was pretty unique. Just about every TMBG-related family member was in the audience, so the show was lite on the swearing. They told a probably-true story about how when they played in Canada last week, they had a very hard time getting the confetti cannons across the border. Also, in a very un-TMBG manner, they were making jokes at the expense of Tammy Faye, Tom Snyder, and Ingmar Bergman, all of whom have died within the last week. Has it really been 4 years since they've done Actual Size live?

This is my second show of the tour, and they only repeated six songs from Seaside NJ last week. The first three songs were firsts for me, and the fact that they opened with one of my favorites- Mr. Me- was just amazing. Out of 14 or 15 shows over the past decade, this could quite possibly be the best. It brought me back to the days in 1999/2000 when they would do residencies at the Bowery, with no new album to promote and totally different sets each night- so you never knew what you were gonna hear.

Haven't seen Mr. Tambourine Man since the 90's, and Spy and She's Actual Size made welcome returns after a long absence. The new songs sounded amazing with the horn section, and Ant was out of left field. Of note is that out of all the times I've seen Them, this is the first time they didn't play Older. Such a great show! I'm kind of bummed now that I have to miss next week's!

This was my first time seeing them and they were absolutely fantastic. I was photographing the show if anyone is interested and the pics can be found here:[1].

This is a review of the downloadable audio of the show, as offered on www.theymightbegiants.com, to which there is a link at the top of this page. In these reviews I usually critique the sound quality, set list and banter.

There have been a few great shows to download since TMBG started this service, and this certainly is one of them. No, this is THE show to download above all others. Dan Miller wasn't kidding when he gushed about the new hi-fidelity audio of the recordings. This show sounds amazing. It has a good blend of straight board mix, audience, and atmosphere. The drums sound crisp, the bass is deep and growling, and for the first time the horns sound incredible.

On previous show downloads that included horns, the horns usually sounded tinny and sharp with no body or personality. On this show, however, they sound full and healthy and they are mixed really well with the band. Think of the sound quality of Live! In New York '94 or Severe Tire Damage. This show rivals those in audio quality. This is absolutely the best of the best.

Also, the set list as you can see is amazing. A great full blend of old and new, popular and obscure. It doesn't get much better than this. If only all their shows had such interesting set lists!

The banter on this one is pretty good, as is the "Phone Calls From The Dead" gimmick. There are a couple flubs. John L screws up pretty bad at the beginning of "In the Middle," which is a shame because otherwise its a fantastic track. Something sounds out of tune in "Working Undercover" and both Johns forget lyrics at some point.

If you've ever thought about buying one of these shows, GET THIS ONE. Seriously.

This was really a debate over me if I should count myself marked for going to this show, seeing half of it on a friend's cell phone after the show. I went ahead and marked myself for the show. I also bought it.

The horns looked lovely in that pixel cover cell phone screen but match the audio to video and it really is something to watch.

The guys looked really REALLY cool playing With The Dark and Metal Detector was a shock to my friend and me.

I was ashamed at my friend for taping half of the concert but it was so cool. And I hope one day, some day I can go to a show in person