Phone Calls From The Dead 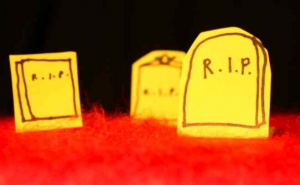 Artwork that is sometimes used onstage during the call 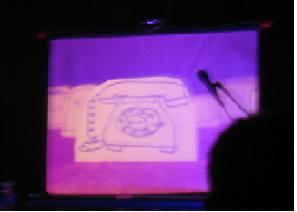 It started when we performed last February at the TED conference in Monterey, California. We were asked not to just do our usual thing.

So we cooked up this "phone call from the dead" thing. At the conference they had had this guy named James Randi who I think used to be a regular magician, The Amazing Randi, and now he's kind of a debunking expert. So he has this Randi Foundation where he offers something like a million dollars to somebody who can prove that they've communicated with spirits from beyond the grave; it's just one of the many ways he's trying to provoke people who claim paranormal stuff is real. So we did this bit in the show where we had the Amazing Randi call us from the dead and demand his own million dollars.

That was the gag and unfortunately I don't think anyone at TED thought it was that funny. We performed our set at 8am right after the blow-out beach party they'd had the night before so everybody who was there was actually hung over and I don't think anybody really liked or got our show that much. Anyway, we decided to stick with the phone call from the dead despite the poor reception it got at TED.