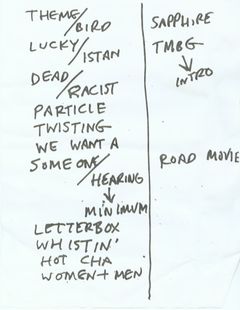 This concert was made into an internet webcast.

It was great to hear Bangs, and Yeh Yeh. Flansburgh didn't go low on the Edith Head vocals, but they used the newer ending. Pet Name is one of my favorite songs, but Linnell left out that syncopated keyboard part, without which it's just not the same. I still managed to enjoy it though. :)

Lie Still, Little Bottle featured the Stick, and this was the first time I'd seen them use it. Right as Flans sang "life is a placebo masquerading as a simile," something about the way he was holding it made it seem especially phallic. So much so, in fact, that with his rhythmic thumping and everything I could have sworn I heard another word instead of "masquerading." Ahem. Spin the Dial was mostly misses, but they did hit on a Springsteen song. Flans does a great impression of him. "Jersey Rock!" Then they returned to this song during the pregnant pause in Older. I've Got a Fang rocked like a volcano. It wasn't on the written setlist, they inserted it at runtime because they saw it written on Adam's t-shirt.

Speaking of t-shirts, I took five Sapphire Bullets shirts for the band. I hung around after the show, and when Flansburgh came out to work the crowd I intercepted him and gave them to him. He seemed appreciative.

And speaking of Sapphire Bullets, they were terriffic. Jared told a great story about how he snuck onto the TMBG tour bus and helped himself to some pizza. There was a little VIP balcony overlooking the stage, and they mistook the people up there for TMBG, and started freaking out.

Tyler: "I just want to stand near you, Solder."

The Flood set was excellent. My favorite this time was Lucky Ball & Chain; I love what the accordion adds to this song. During Particle Man, A guy dressed as Particle Man started crowd surfing. He landed on me once gravity caught up with him, then rocked out like mad right next to me for the remainder of the song. Unfortunately his Particle Deodorant was no match for his superpowerful Person Odor.

Banter before Polk: Linnell rants about Presidents always living in Washington DC and drops the F Bomb three times. Flansburgh joins in and drops it about three times also....awesome!

Banter after Angel: They talk about the scary costumes everyone is wearing and how the crowd seems to know the words to old songs better than they do.

For Lie Still, Little Bottle, Flansburgh described the Stick and asked the crowd to snap along to the beat. Linnell played bari sax.

The Spy improv included a bit of "To All the Girls I've Loved Before."

This was definitely a top 5 show for me. Why was it a top 5 show? The band was tight. They ripped through their songs and Flansburgh was in one of the best forms I've ever seen, just taking control of the crowd, the band, and the show at large. Flansburgh gets an A+ for this show.

Definitely the best Flood show I've ever seen. Some people might not say that because they didn't talk too much, but they ripped through the Flood set without hesitation. Some highlights:

What were they wearing??? They had on the very bright t-shirts, and a few band members (Including Flansy) had silver nail polish.

The departure of Dylan and the arrival of Stormy Black. Dylan (Miller), Sapphire Bullets' original guitarist is no longer with the band, so now Stormy Black is now with them instead. He did nothing but impress, particularly on the Istanbul solo.

Istanbul: once again, one of the best acoustic guitar intros I've heard. Not just technical but very melodic. I would have been happy just here them jam out to that intro for a few minutes. The was also the first time Corey (Hickey) got to introduce one his latest additions to his drum kit, an electronic drum pad.

Dead: Tyler (Flans) does more of the backing vocals.

Particle Man: In the audience was Particle Man (As well as Triangle Man). Particle Man decided to crowd surf during the song. Also, Linnell singing "Elusive Butterfly of Love" again during the breakdown.

We Want A Rock: One of the few snafus tonight. Stormy's guitar wasn't quite working right for half the song.

Whistling In the Dark: No bass drum anymore, but Corey gives us a snyth concert bass drum on his electronic drum pad, as well as the sound of glass breaking.

Hot Cha: The other snafu in tonight's Flood set. Tyler sings the wrong verse at one point. This song is probably the HARDEST one for them to perform because they never play it, and the intro is one that HAS to be practiced. More on why Tyler flubbed up later.

Sapphire Bullets: Lots of cheering whenever the band mentions their own name during the song. Also, a couple of times, Jared (Linnell) would look up into the rafters and swear that he saw the band up there! He then proceeded to tell a story about the ONE time he got to meet someone in the band, albeit their road manager. It involved pizza. Oh, lots of girls screaming for Parker (Weinkauf).

Road Movie To Berlin: The BEST performance of this song I have ever heard. Jared had the whistle sound on his keyboard perfect, and the song was performed with reverance. An excellent ending to an excellent full album set.

A number of great banter moments such as Linnell going on a tirade "This s**t is f**ked up!".

James K. Polk: Flans: "This song is about a president from Washington. And why are they all from Washington? Isn't that a bit rigged?" Linnell: "I would have to agree, GODDAMMIT!"

She's Actual Size: After the song, Flans mentioned that it's tough enough to remember words from songs they haven't played in 10 years, but it's even harder when they have to look at someone with an eye in the middle his forehead!

Doctor Worm: The "samba" version of the break-down with Hickey on the synth kit.

Yeh Yeh: First time I've heard this live. Linnell on bari and Miller on keys. Before they play the song, Flans starting thanking everyone as if it's the end of Saturday Night Live. Then the band proceeds to play the exit music for SNL; it's a classic TMBG moment. You have to hear this live, it features audience singing along with Linnell on the "ohhhhhhhhh" in the 3rd verse, and one the best Flansburgh guitar solos.

Spin the Dial: Doom is just the intro music before Spin The Dial. Featured today, a simple easy-listening song, a quick skip over Alien Ant Farm's Michael Jackson cover "Smooth Criminal," and the best part of it, when they get a Springsteen song. This would be a running gag for the rest of the night.

Why Does The Sun Shine?: You know, I never get tired of hearing this live. Estrogen again.

Man, It's So Loud In Here: First time hearing the disco version. The Dans leave the stage, and they turn on the backing music. It's a very fun sing-along song, not to mention to dance to (If I could, the crowd was very packed tonight).

Robot Parade: After the song, Flans sings: "I think we're losing them Linnell. They need to hear something more familiar. Something that isn't on the new album." And proceeds to get everyone to sing G-L-O-kenspiel.

New York City: Flans: "This is a song about where we live. And we're very proud of it." For me, the high water mark of the show, I have been waiting all show for this. I never sang NYC so loudly before. It felt like a release.

Boss Of Me: The loud singing didn't stop here!

The Guitar: Stormy on the guitar solo.

Flans: "We forgot to put this song on the set list, but there is a guy in the front who took care of it for us!" (My friend Adam had a T-shirt that says "I've Got A Fang") "And the cool thing is that no one else can see him, so they don't know what song we're talking about!"
Linnell: "Okay so here is the next song that I'm not going to tell you."
Rich E. Green: "Fang!"
Linnell: "Shut up!"

Spy: The keyboard player from okgo joins in on guitar for the improv section. Also, Flans sings "To All The Girls I've Loved Before."

Bangs: Another first for me. Very nice sounding, and another song that is great to harmonize to.

Pet Name: Flans: "This song goes out to our lighting man Iggy (Who was dressed as a pimp), even though we do this song in the dark."

Dig My Grave: Always the great show closer. With that, TMBG leaves after playing the tightest extended show I've ever seen them play. Great job guys, can't wait to see you all at the next few shows!!!