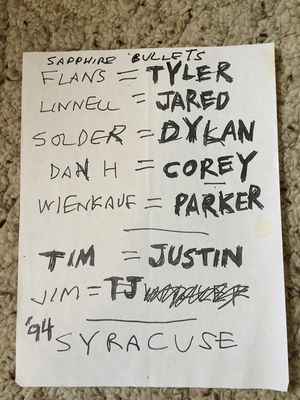 The members of Sapphire Bullets

Stormy Black was recruited for Sapphire Bullets after winning a competition called Guitarmaggedon, at least according to what was said at the 4/28/03 show in San Francisco. For winning, he was apparently guitared-and-feathered. Stormy's name is evidently a parody of Snowy White, a guitarist known for his work with Thin Lizzy and Pink Floyd.

The name of the band is derived from the song "Sapphire Bullets Of Pure Love" off TMBG's 1990 album, Flood. The band has expressed their fondness of the album, and their set always consists of them covering the entirety of Flood, in order.