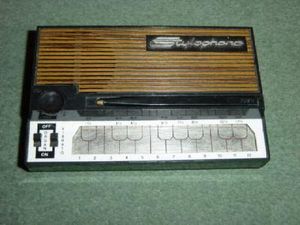 The stylophone is a handheld keyboard synthesizer, first produced in the late 1960s. As the name implies, the stylophone is played with a stylus: touching the pen to the metal keyboard closes a circuit and produces a tone. Stylophones were marketed largely as children's toys, but artists such as David Bowie and Kraftwerk have given them new life in pop music.

John Linnell has been known to play the stylophone since the early 2000s. Jim O'Connor played the stylophone for They Might Be Giants in 1999, on Dan Vs. Cog and its predecessor Born In A Graveyard (visible in the Daily Show Greatest Millenium special).

The stylophone can be heard on the following songs:

In the late 00s, Johns Flansburgh and Linnell picked up a pair of Gakken SX-150 synthesizers, which may be mistaken for stylophones due to their handheld size and use of a stylus. They have come out during some performances of Hearing Aid [ [1]] and Lie Still, Little Bottle [ [2]], and Flansburgh typically performed his 123 solo on one.