The very first They Might Be Giants show, performed at a Sandinista rally in Central Park. They were introduced as "El Grupo De Rock And Roll". "We played a FSLN rally outside somewhere on the Great Lawn of Central Park for what one could safely assume was an entirely Spanish-speaking audience and mostly bona fide Sandinistas. We got a positive reaction, but they were already in a very good mood."[1] They played to a crowd of about 30 people,[2] and were the only English-speaking band on the bill.[3] Flansburgh: "We thought it would be a hippie gathering kind of thing, but it was actually a meeting of Sandinistas."[4] 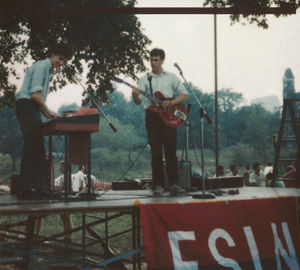 The exact date of the show is uncertain, but the month of August has been mentioned.[5] "Space Suit" was the first song played, according to one interview.[6] "El Grupo De Rock And Roll" was how they were introduced, but the group was unnamed at the time. A 1987 interview states that they played this show under the name "Circle Gets the Square", which is also a lyric from the song Sally Boy Candy Bar, though this is the only time that detail has been mentioned. Flansburgh once said that they did perform this show under a name, but that he refuses to reveal what it was, stating: "We first had a really bad name - a name so bad that John and I have made a vow that we will never tell anyone, even our children. We used it for our first show. [...] We had this really terrible, terrible, embarrassing name."[7] It isn't clear what name he was referring to - whether it's "El Grupo", "Circle Gets The Square", or another name entirely.

It seems like a very fuzzy yesterday to me that John and I were carrying the majestic but ponderously weighty Farfisa organ over the rock walls that border the cab route going through the middle of the park. I recall we played "Cowtown" and "Space Suit" (with Linnell playing the clarinet) Other songs I vaguely remember are "Penguin" (sample lyric:"penguin, penguin, all alone and lost, standing, sitting, looks for a place to park") and "Cabbagetown" (which ultimately became an Elektra b-side) It would be 1983 before we played out again (where we would incorporate the cutting edge technology of the 4-track reel-to-reel tape recorder) but the first one was there, and you are all invited to celebrate its anniversary!

In an interview for The American Eagle from October 17th, 1988, the band was asked about the show:

Linnell: It was a free concert in Central Park in New York.

Flansburgh: It was the third anniversary of the Sandinista revolution. It wasn't a very big rally. But a friend of ours who is like a leftie person had us come and do this thing, and nobody in the audience spoke any English. They were all recently arrived Nicaraguans, but they apparently really dug the show because they came back and tried to tell us how much they liked us in the few words of English that they knew.