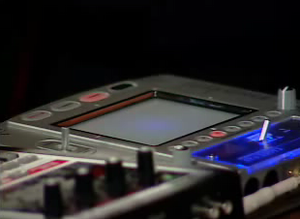 The Kaoss Pad, also referred to as The Future of Sound, is an electronic effects processor and MIDI controller manufactured by Korg. John Linnell occasionally uses a Kaoss Pad during live performances, especially during a segment called The Future Of Sound, which highlights its unusual effects. Linnell's Kaoss Pad is mounted on his keyboard stand. The device is controlled through a touch pad, with each effect's parameters changing based on where contact is made.

Live songs that may use the Kaoss Pad[edit]