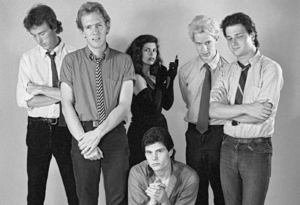 The Mundanes was a Rhode Island-based new wave band that formed in 1978, in which John Linnell played keyboards and saxophone prior to the formation of They Might Be Giants.

In addition to Linnell, the band included Marsha Armitage, John Andrews, Kevin Tooley, Dean Lozow, and Jonathan Gregg. The Mundanes self-released a three-song 7" single in 1980 before relocating to New York in the early summer of 1981. Linnell left the band in 1982 to focus on They Might Be Giants, and The Mundanes ultimately broke up in 1983.

The Mundanes briefly reunited for a private concert in 2008[2], celebrating 30 years since the band was founded. The band possibly reunited again in 2013[3].