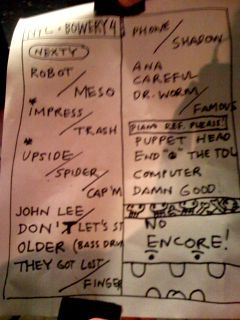 This was my second ever TMBG show. The first was last week. If you told me to choose my favorite, I'd say this one. Why? Fingertips and The Famous Polka. I was so happy to hear those. Also, I was in the front row, leaning on the stage, right under Linnell. They played a lot of songs from last week, many of which were more than welcome. Hearing the horny (haha) version of With The Dark again was fine by me. My favorite The Else song, as a matter of fact. Particle Man was fun as hell. Was it just me or did Flans introduce the band about 7 times? Early songs such as Put Your Hand Inside The Puppet Head and Ana Ng were also sick. The intro to Older kicked ass. And, not just regular ass, but super ass. John Lee Supertaster was also very welcome. As for Phone Calls From The Dead...let's just say that Marty Beller should sleep with one eye open, or he's going to lose it. His eye. He's going to lose his eye. Both of them. I crack myself up. John Linnell's magic eyes caught mine a few times, and with his happy stare, even if he's not looking at you...he's looking at you. Fun was had with vvedge through out the night and with HeyErikLeafinson and TDK before the show. Also, most importantly...I grabbed Linnell's setlist off his keyboard. It's good to be tall. I'll try to photo my setlist, if someone else doesn't do it before I get around to it. Shame they never used the confetti cannons. EDIT: Someone posted vedge's picture of my setlist. That was fast! Now, onto my wall the setlist goes.

A fantastic show, as always. I know there wasn't really a theme, per se, but it felt sort of like a 'Best of the Bowery Ballroom Shows' night where they revisited bits they liked from the prior three Wednesday shows. Marty Beller asked me to let you guys know that the entire elaborate New York hospital Opthamology Department/Marty Beller's eye procedure was a long set-up joke to lead up to the Jerry Orbach bit in Phone Calls From The Dead. I'm guessing John Flansburgh sold it too convincingly for Mr. Beller's comfort, or someone asked if he was all right afterward. Those guys crack me up!