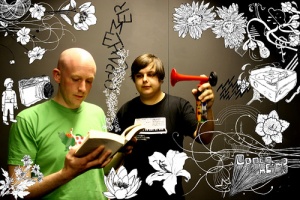 Shaun (left) and Rocky of Oppenheimer

The duo opened for TMBG during TMBG's 2007 Fall Tour, and continued to open for them through March 2008. TMBG, Jamie Kitman, and The Hornblow Group (the band's management) are thanked in the liners of their album, Take The Whole Midrange And Boost It, released June 2008 on Bar/None in North America and Fantastic Plastic in Europe.

On December 10, 2009, Rocky & Shaun announced that they would be moving on to other projects, and that Oppenheimer's final show would take place in Belfast on the 19th.