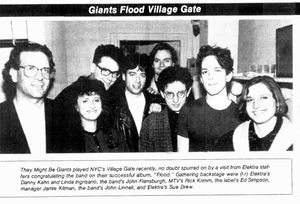 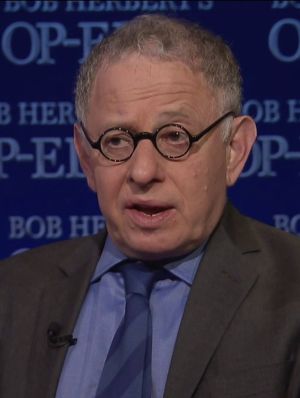 Jamie Lincoln Kitman, Esq., founder of The Hornblow Group, was TMBG's manager from the mid-1980s to late-2010s.

Kitman is interviewed in Gigantic, and in the commentary the Johns and AJ Schnack joke that he single-handedly tried to drive Gigantic into an R rating because he curses three times.

Kitman is an attorney and he reviews automobiles for Automobile Magazine. His prose is casual and quite funny. His article, "Our Roadies, Ourselves", which appeared in the February 1988 issue, is a story of a Giant road trip with Johns Flansburgh and Linnell, Bill Krauss, and himself in a Plymouth Voyager.

He also had a feature in BBC's Top Gear magazine, and many of his articles, such as Back the Pony, appear on the website. In addition, he previously kept a blog on the site.

In 2022, he was interviewed on the They Might Be Giants fan podcast 9 Secret Eps, where he spoke about his 30-year career managing TMBG, beginning with the story of how he met John and John.

The starting point for my management career was the unshakeable belief that the world wouldn’t be a better place until as many people as possible knew about They Might Be Giants... If I had to name a person who inspired me first and longest, it would be TMBG’s John Flansburgh. His work ethic is extreme yet highly-admirable, if possibly toxic to lesser men and women, but what I love the most is his resilience. His partner in TMBG, John Linnell, whom I love dearly, is obviously a very motivated genius as well.

They're some type of cranky New England Yankees, you know? Uh..I could say if you were trying to put the sort of sub-species of people that they're in, they have Puritan elements to their components; they have, like, old-fashioned New England liberal elements, and also, they're sort of these really boho Williamsburg art-fuck type of tendencies—and I say that in a caring way.