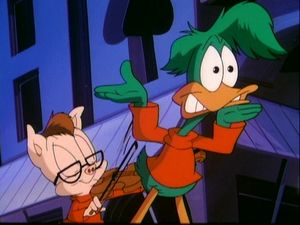 Steven Spielberg Presents Tiny Toon Adventures (often referred to as Tiny Toons) was an animated series that ran from 1990 to 1994, and offered many current They Might Be Giants fans their first exposure to the band's music.

On February 1, 1991, the 51st episode of the series, entitled "Tiny Toon Music Television," first aired. The episode broke the normal format of the series and consisted of five animated music videos starring the show's characters. The first two were videos for tracks from TMBG's then-new Flood album: "Istanbul (Not Constantinople)" and "Particle Man".

Both music videos are included on TMBG's 1999 video compilation, Direct From Brooklyn. John and John also recorded audio commentaries for both videos, during which they discuss how they were contacted by Warner Brothers for the project, and how the videos were the 'easiest' they'd ever made, as they had relatively nothing to do with them. They comment on the violence of the wrestling-themed "Particle Man" video and the portrayal of the saxophone solo as being done with an accordion. John Flansburgh also expresses his disapproval of being portrayed as Hamton (a pig) in the Istanbul video, though they realize he may be portraying Mark Feldman, who played violin on the track. While TMBG seem not to think much of the cartoons themselves, they do credit the exposure they gained from Tiny Toons as an important step in their career.