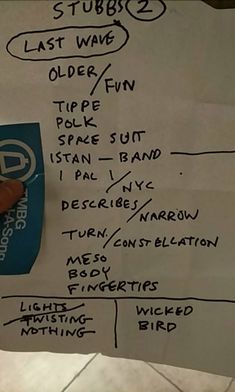 My mother put Flood in my Christmas stocking in 1991. What? Who might be a giant?? Since then these guys have been a huge part of the soundtrack of my life. Their shows are always a pleasure, and this was no exception. They played nearly all of Apollo 18 (minus Hall of Heads and If I Wasn't Shy). And sprinkled in so many fan faves along with a few of their more esoteric album tracks that never fail to be buckets of fun. The small quasi-acoustic set they're calling "The Quiet Storm" is just the two Johns and Marty, with stage lighting that looks like a campfire sing-along. This made up the first 6 songs of the second set, ending with a version of Istanbul that was just off the chain! Marty left the stage and the Johns started folksy and heartwarming, transitioning into a trippy dialog with mics on reverb, and were then joined by the rest of the band for a hard-driving rock outro. It was truly something to behold. We walked out humming about blue canaries and bees in my bonnet, and it was easy to wish they had played dozens more of my personal favorites, but that's pure selfishness on my part. Thanks so much, guys, for all your years of swimming upstream.