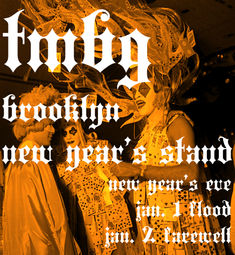 They Might Be Giants
Music Hall of Williamsburg in Brooklyn, NY
January 1, 2016 at 8:00 PM

This show was an interesting one. I didn't bother bringing the microphone to this one because I had already recorded a Flood show within the year. I went to the show wearing a yarn dwarf beard (the one that was in the selfie I took with the set list that made it onto the band's facebook page, also was apparently referenced during Shows/2016-04-05, which is incredible to find out about, thanks for telling me TDK!)

I'll tell you, I wouldn't recommend going to a concert and wearing a fake yarn beard the whole time, because it gets hot. Really hot. At times I felt a bit faint and during the intermission I took it off just to cool off. I want to wear the beard to another show in the future though, just to see if Flans or anyone else recognizes it.

All in all, the show was fantastic, and a great way to spend New Year's Day.