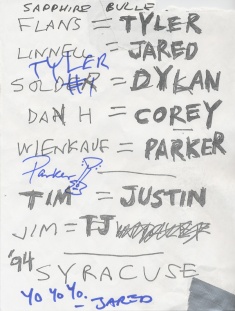 Review by Manley:
Allright, for my first show in NYC, I was quite impressed. Great stuff. The crowd was nice, and well spaced out with plenty of room to dance, not like Philly, with people crammed togetyher everywhere. The band kicked total ass tonite, playing two sets, the first as a TMBG cover band Sapphire Bullets, playing the entire Flood Album in sequention (is that a word?), then coming out again as They, and playing a whole new set Bonus!!

Two big surprises came at this show with the guest singers of M. Doughty to sing Your Mom's Allright, and Robin Goldwasser to sing Dr. Evil and In the Middle.

Great talk from the Johns about the New album, and what's wrong with it, and some fun crowd interaction with Battle'O'Im and during the show, Linnell saw someone talking on a cell phone. He asked for the phone and called back the guy they'd been talking to. He wasn't there, but John left a message on his machine. great times.

I did see John F. after the show at the car garage, and sadly brought a whole buncha attention to him when I got him to sign my setlist and talked with him for a bit, which ended up backing up the parking garage, and stopping John from paying.

All in all, though, a good show. Definately must go back to NYC again.