Apollo 18 is They Might Be Giants' fourth studio album, released in 1992. It was the band's second release with the major label Elektra Records. 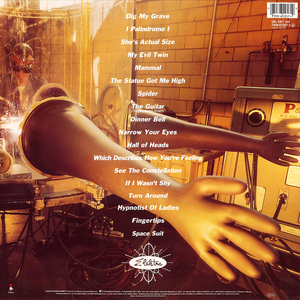 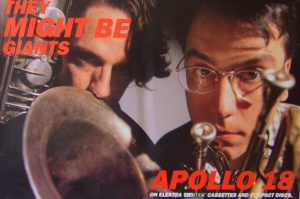 An Elektra poster promoting the album

For the band's follow-up to the successful Flood, Elektra approached Elvis Costello to act as producer. John and John feared self-consciousness in the face of such an admired musician, and had assumed that Flood's accomplished fruition would serve as an indication that the band was mature enough to produce the album itself, as they had originally planned. This disagreement caused a rift between Elektra and the Johns, which took a while to heal. Flansburgh, Linnell, and Susan Drew of Elektra discuss this subject at length in bonus footage included on the Gigantic DVD.

Apollo 18 illustrates TMBG's first significant attempts at fleshing out the simpler sound employed on earlier albums. The album's accompanying tour, named the Don't Tread On The Cut-Up Snake World Tour, was the band's first to use a live backing band.

The album's cover art, which depicts a giant squid locked in combat with a sperm whale in space, was sourced from the an issue of the pulp science fiction magazine Fate. Art surrounding Apollo 18 tended to have a space theme; it was designed by John Flansburgh under the pseudonym "Rolf Conant". While searching the NASA archives for graphics, John and John were approached by the NASA staff and selected as Musical Ambassadors for International Space Year. The logo for International Space Year is included on the back cover of the album.

The original Elektra Records logo from 1956 is used extensively throughout the record's packaging.

Apollo 18 debuted on the Billboard 200 album chart the week of April 11, 1992; it spent 6 weeks on the chart, peaking at number 99. The album generated three singles: The Statue Got Me High, I Palindrome I, and The Guitar (The Lion Sleeps Tonight). "The Statue Got Me High" spent 8 weeks on the Billboard Modern Rock Tracks Chart, peaking at number 24. The other singles from the album failed to chart. Music videos were produced for "The Statue Got Me High" and "The Guitar", the former having a space theme consistent with the art surrounding the album, and the latter being the first TMBG music video directed by John Flansburgh.

Apollo 18 is an unusual album, mainly due to the "Fingertips" tracks: 21 short songs which average about 13 seconds in length. The liner notes state "The indexing of this disc is designed to complement the Shuffle Mode of modern CD players." This implies that the CD was designed for listening on shuffle—as you listen, the "Fingertips" tracks get interspersed among the songs of average length, creating a pleasant "musical collage". In most regions, "Fingertips" was properly divided into separate tracks for the CD; however, due to a mastering error at WEA, European and Japanese versions included the entire selection of "Fingertips" as one continuous track, a flaw which has continued to occur in more recent discs prodcued.

In the era of digital and streaming music, the unique nature of "Fingertips" has again proved problematic. According to Flansburgh[1]:

For some interval on iTunes, because of some entity involved not wanting to pay full publishing on all the individual tracks[, they] kept it [off] the site completely, and then they left the song off and finally a single song got posted. There were parallel issues with streaming sites for some time, but the single song seems to be the only working solution to whatever issues the short tracks kick up.

Seems like miniature songs don't count as "songs" for some platforms — don't count as plays, don't trigger royalties. Can't say I fully understand but it is a workaround and seems kinda dumb, but then again I don't know what record [companies] or publishers feel about paying out on "skit" tracks on hip hop albums, which if counted as compositions could double the number of "delivered" tracks and "published" songs, which would be a very big financial liability for something that might not otherwise move the needle, or be respected in a contract.

The TMBG Online Information Bulletin run by Bo Orloff sent out five updates on the subject of this album: