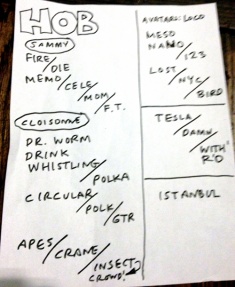 Flansburgh: "Most bands do silly things like trying to end all at the same time. With They Might Be Giants, it's seeing who can end first."

Flansburgh: "You guys are a great crowd. And on a Tuesday night!"
Linnell: "You almost make it feel like... a Thursday night."

During Drink!, those in the balcony and those one the floor were divided to create an echo effect.
Linnell: "They Might Be Giants: Dividing crowds since 1989"

Whenever referring to Nanobots, the Johns would pronounce it as "naNObots."

I was really surprised by the setlist at this show because other than playing "The Mesopotamians" before "Nanobots" instead of after it was exactly the same as Houston three days before. I know they're catering to people who are not following them around going to multiple shows, but usually they pull out at least a song or two that they rarely play to make it more interesting for those of us who are. They know there are people who do that, and it's not like they don't have PLENTY of songs to choose from. So that was a bit disappointing, but of course I had a really fun time anyway, because even seeing songs you've seen a million times before is great when it's TMBG.

After "When Will You Die" John greeted the crowd with "How the devil are you?" cos he's ADORABLE.

Before "Call You Mom" John was talking about the new album, "NaNObots," in a silly voice, and then he was like "I'm Reverend Farrakhan..." Flans said "I'm the S1W's," which I had no idea what it meant but my boyfriend informs me is a Public Enemy thing.

During the "Girl you know it's true" part on "I'm having a heart attack," Flans was kneeling down singing directly to one girl in front, and at the end he kissed two fingers and held them out. Maybe he always does that and I've just never noticed cos my attention is generally focused just a bit on another member of the band, but it was pretty fantastic.

After they played that John asked, "Do you smell chocolate chip cookies?" He seemed very confused, but I know exactly what it was--this guy near me had an electronic cigarette, and when we were talking before the show he was saying the stuff he had in it was chocolate (and something else)-flavored. Flans said "the band next door" was making them. JL: "The Doubletree Hotel?" JF: "They're the Doubletree Hotel of bands."

When John was getting out his bass clarinet, Flans was talking about Nanobots and he said, "It's early in 2013 but I think we can say this album has more bass clarinet than any album in 2013." Then he admitted there might be classical all-bass clarinet albums, but he doesn't believe there will be because "I live a very cloistered existence."

Afterwards, Flans said, "Other bands have big musical ideas like all ending a song at the same time--in They Might Be Giants it's who ends first. That's the winner of the song."

Then Miller came over to the keyboard for "Doctor Worm." Flans asked him, "What selection are you going to play for us tonight?" and Dan looked either amused or embarrassed (or both) and said what looked like "I don't know." Flans: "Speak into the microphone."

When Flans was explaining the audience participation part of "Drink!" he referred to the people in the balcony as "the one-percenters," then "I shouldn't say one-percenters, I should just say 'takers.'" He said everybody needed to be trying hard to do a good job because "You don't wanna be eclipsed by the musicality of Houston!" When people started booing he said, "Oh no, I said 'Houston' and then 'eclipsed'!" As a Houstonian I was of course like "FUCK ALL Y'ALL" when they were booing, but I suppose it's only fair, cos I would have totally booed Dallas.

JF: It's a Tuesday, but with the wind chill it feels like a Thursday!

Before "Circular Karate Chop" Flans said with the new songs "we will be burning a hole into our fretboards staring at our hands." He said the new songs were "exciting to hear and startling to play" and that this one starts with "a jaunty F chord."

Next they were introducing "James K. Polk," and John said the song left out "the parts we don't approve of" and encouraged everyone to "do your own research" on "the Wikipedia thing." Flans said "We're teaching the controversy" and John said they aren't, and Flans corrected himself with "We're whitewashing the controversy" and something about sweeping it under the rug.

After the "He seized the whole Southwest from Mexico" line John said "Wink wink" because of course this was a show in Texas.

Then was "Battle for the Planet of the Apes." JF: "For this next song we don't just teach the controversy, we make the controversy." After he split the audience up he was like, "Thanks for your cooperation, we wanna thank you all for coming to the show, our job here is done...dividing audiences since 1989." Later he said "Professionalism is job number three for They Might Be Giants," and reminded everyone that "This is only a competition! That's all it is! It's all about winning! There is no good part to losing!"

It was a tie. Flans said "This has never happened before!" and I can report that not only have I been to several shows where it has happened, he always says it's "never happened before." Then he said the secret was that the People are related to the Apes and encouraged them to hug each other--"It's the ultimate bromance! The People and the Apes!" Then he told the story about the thing in Houston where some of the People were flipping off the Apes. "Winning wasn't enough--those stereo birds had to be flung."

Then Flans introduced "They'll Need a Crane" as "a gentler song from a gentler time," which is a pretty funny way to talk about one of the most brutally heartbreaking songs ever.

Blue Avatar: "We wanna thank They Might Be Giants for PHONING IT IN...Pretty good, for some OLD GUYS." I am generally not very into the Avatars, but every once in awhile they do crack me up.

Then they introduced their special guests, the Supreme Court. The Supreme Court ws sad because they "got crappy tickets" so the Green Avatar told them to buy earlier next time "and not from that scalper guy." When they were getting ready to sing "He's Loco" the Blue Avatar said that while TMBG has a new album out theirs is being "culturally suppressed" because it's "too real."

When The Johns were coming back from Avataring the band was playing the theme from Dallas and John said it was the Avatars' theme before it was for the TV show--"They make us say that."

Then Flans told a story about how they'd had dinner the day before with management people, and that someone was trying to give them money for rights to the theme from Roots, and that they didn't know how long to go along with it. "Yes, they wrote the theme from Roots...when they were teenagers...you can just send them that check, care of Jamie..." Then they explained that they had a song that had the same name as the guy who did write the song, and John said, "It's even more complicated and tedious than that." Flans: "it's like that movie with Leonardo DiCaprio...I'm sorry, I've told a story with no ending."

Before "Nanobots," Flans was being silly with his vocal effect again:

Then Flans did something with having the effect slightly on John's mic, then:

JF: You're wondering why I have two voices. There's no answer to that.
JL: There's no punchline at all.

Also, I'm not sure what song it was but I think it was "The Guitar," appropriately enough--Flans broke a string by ROCKING TOO DAMN HARD, so he had to use a different guitar briefly. What a badass.