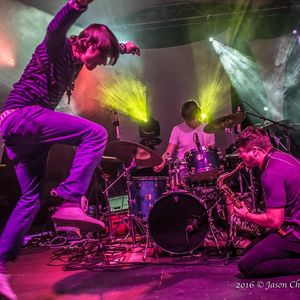 Moon Hooch formed in Brooklyn and is managed by The Hornblow Group, through which they connected with They Might Be Giants. The band opened the majority of TMBG's shows on the 2013 Nanobots tour with then drummer James Muschler. Over the course of the tour, they were very warmly received by both TMBG's audiences and show reviewers alike. John Flansburgh occasionally joked that TMBG was becoming a "Moon Hooch tribute act", particularly after John Linnell acquired a contrabass clarinet. During the 2013 tour, the trio also released their eponymous debut album.

Following their tour with TMBG, Moon Hooch went on to tour alongside Mike Doughty of Soul Coughing.