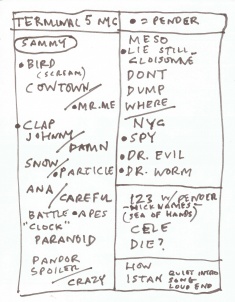 New York City was performed the way it was on the original studio version, with the guitar solo at the very end. Flansy broke all his strings and detuned his guitar at the end of Istanbul.

This was a really swell end to the tour! A friend and I rode to NYC with Kelly and got on the "line" at 2:30ish. Name tags were handed out, cupcakes were purchased, etc. After a lot of really terrible organisation with the IFC tickets (and everything else), during which I threatened (@tmbg) to delete the band member pages from the wiki if the venue didn't get its shit together, we got into the place and I managed to be right up in front, just behind a very short woman we stood in line with. JoCo did a great set and TMBG came out just a bit later. The setlist was really neat and I appreciated the concentration of Lincoln type songs. Everything was generally great, except the part where Dan Miller accidentally knocked over Linnell's mic stand (and it fell on the head of an unsuspecting photographer). But yeah! it was a good show! and I can't remember anything clearly enough to type it but it was great! Afterward I managed to get a setlist—some guy almost grabbed it away but Victor was nice enough to maneuver around him. I can't wait to see them in Princeton!

The show was great! Here are a small selection of songs I managed to capture on video: TMBG @Terminal 5

This show and NYC were so much fun! It was great to see Kelly, Becky (and family), Marcia, Johhny, Jason, Anita and Jessica! It was also my first time walking through Times Square!
The show itself was great! It was crazy how many people were there, but great to see so many TMBG fans! Jonathan Coulton was amazing and hearing him with Suzanne Vega was a treat, too! JoCo told me he liked Pluto too, "FOR A DWARF PLANET!" which was hilarious!
TMBG was wonderful, and I love when they have the horns with Them. The Avatars were funny, with the Green one stalking the Blue one, their love for Pandor, and their connections to the Supreme Court. Hearing Goldie was a great experience, especially having the two "Doctor" songs back to back! The nicknames were funny and ending on "Istanbul" is a classic.
Thanks for an amazing show guys, see you in Princeton!

My 4th NYC TMBG show; I didn't think it was one of their very best shows (of the handful of times I've seen over the years) but I still enjoyed it immensely---how can you not?! The venue was interesting; I had an upper-balcony railing location not far from the stage-front, and that was definitely a unique vantage point I'd never experienced in any of their shows! Can't wait for my next one...

Man, my throat hurts from all the screaming I have been doing after the show. There was so many guys so close to me that were ecstatic. So anyways the show started off with "Sammy Intro", and both Flans and Dan came out with their guitars, and then went right into Birdhouse. Mark "The Loveman" Pender was at the show, and he sure did travel far to be on the show and play trumpet on some songs on the setlist (NOTE: Dan Miller was wearing a hat and Linnell was in a hoody).
Dan Miller got to the keyboard as Linnell switched to the accordion for "Cowtown", they did a pretty good version, complete with screaming effects during the solo.
Mark Pender came out, and then another song off of "Lincoln", and they did Mr. Me, which I never heard live before, Pender played the trumpet for the whistling noises.
During "Clap Your Hands", this time Mark Pender played on all the verses of the song instead of the last two which sounded great.
They continued to pogo into a perfect version of Can't Keep Johnny Down, and then both Flans and Dan played the solo outro at the end of "Damn Good Times".
They did a 5-minute version of "Snowball In Hell", which turned out to be a very long spoken section by the Avatars Of They. Green Avatar did all the other dialogues for the last 2.5 minutes, they even made up some lines in the song which was quite funny.
They went right into "Particle Man", where no one was instructed to clap.
They did a unique intro to the new 2012 version of Ana Ng, which was playing a lot of strange-sounding chords at the start.
They went into "Careful What You Pack" and that actually sounded pretty decent live though!
At the end of "Battle For The Planet Of The Apes", People won. Just like last time at the TLA show, Flans used a flashlight to divide the audience in half.
Finally the Avatars of They come back, and were introduced while "The Syncopated Clock" was playing, Flans introduced them "from New York City". "Paranoid" was segued right into shortly after, also they introduced a new sponsor called "Pandor" which turns out to be a "fictional drug that are made of pills".
Spoiler Alert actually sounds pretty decent live also, complete with putting their hands over the puppets' eyes during the "scratch my head and one to cover my eyes..." section. They went into Crazy Train for their outro.
Like always, they did The Mesopotamians, and finally...
Linnell broke out the bass clarinet for the next two songs, they did Lie Still and we weren't instructed to clap with the snare drum in the song so it became a jazzier feel in this song. Pender used a plunger-shaped mute with his trumpet during this song. Unlike last time, we weren't instructed to clap and the beat became a more jazzier feel. It was awesome. :3
Danny got on the keyboard for Cloisonné. After the song, John and John start talking about "Sleestacks" there.
They eventually went right into "Don't Let's Start", and then a good version of "We Live In A Dump"
And finally, they did Where Your Eyes Don't Go, which I found it pretty good live. After "...and you'll never be discovering..." line, Flans didn't do the vocalizing on time so Linnell did synth vocalizing on his keyboard. Complete with nice guitar work from Dan.
They did a good version of "New York City", Flans sang, "The empire state where Dylan lived" line there. In fact, it was performed the way the studio version went.
During "Spy", it was kinda an extended intro. At the end, Linnell conducted the band for the jam outro, just like they do in the studio version.
The next portion of the show turned out to be the last two songs that are "about doctors". They played the intro of "Theme From Dallas", as Flans introduced Robin who came out looking very nice. Linnell once more broke out the accordion and Dan went back on the keyboard and they did the "Dr. Evil" theme from Austin Powers.
The last song about doctors turned out to be "Doctor Worm", during the second verse, After Linnell sang "I can't hear the doorbell", Dan accidentally knocked over the mike stand and fell onto a photographer. Dan had to jump off the stage and one of the stage crew had to help get it back onstage. Also, Dan's dancing while on the keyboard during the song.
First Encore - Band was quickly introduced, and they did some audience nicknames and both Johns used the flashlight to point out some members in the audience to nickname, complete with a jam during this portion Flans eventually instructed the audience to wave a hand back and forth so that they can be ready to rock, and they did "Celebration", they eventually ended the encore with "When Will You Die".
Second Encore - John & John only returned to stage as Linny broke out the accordion again, and they did a cool version of "How Can I Sing Like A Girl?", I swayed my left hand in the air to represent "The freak flag", it was pretty high but I wasn't alone at all.
The full band was revealed, and closed their set with Istanbul. No guitar or trumpet intro, so the intro was cut short but they kept the jam outro at the end, and turned out to be about only 2 minutes there. At the end, Marty threw his sticks into the audience, and then Flansy broke off all his strings off his and then detuned his guitar shortly before disappearing off stage.

So, that's a wrap for the Join Us tour. At the end of the show, all the members went back into their cage after the show. I even managed to get a setlist. At first, I almost accidentally snatched the setlist, sorry guys! O_O (Funny) But I realized that one of the stage crew was going over people who ran up at the front so I was one of them one of the stage crew gave me a setlist, yay! :3

I also thought this was one of the weaker shows. My first TMBG concert was in Lancaster last summer. That one was pretty awesome. The best this tour that I attended I feel was at the Byham Theatre in Pittsburgh. TLA was great as well. I felt the setlist was rather weak in NYC. I am not a fan of "We Live In A Dump" (which I feel is compositionally weak) Why they keep playing it I don't know, however they wrote it so they can perform it how ever much and when they want to. I have to respect that. I am grateful for being able to talk to the Johns afterwards, however. As I am composer/musician myself who is very picky on musicians I respect. Anyway, I was very happy to hear "Mister Me" That was a highlight. The fans there were kind of rude. Even though I was about 8th in line. They were pushy and only through a kindness of a friend did I get in the front row. Perhaps it's just the mentality of some New York people. Here I was under the assumption the TMBG fans are among the nicest people. I mean I am originally from the Philly area however I don't butt in front of those who were there before me however those people are like "This is MY number in line!". Especially that I almost got frostbite in my fingertips ( no pun intended) since I was waiting a long time.