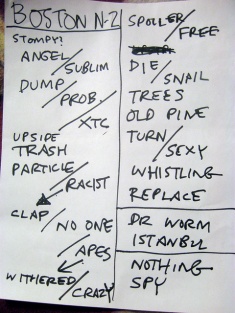 Hey, User:SoreThumb again. Here's a recap of what we learned from the A-M show:

After the fun from the first show, I simply preferred to sit in my seat, no matter how far back it was. Was hoping for The Statue Got Me High or Where Your Eyes Don't Go, but they surprised me with songs I didn't know I wanted. B) Turn Around was one of them; it made me glad my GF heard an actual performance of the song I had been singing for a few months. (Maybe Monsters of Mud'll get popular?)
Holy crap! Some awesome guy on the trumpet was there both times! ... Oh, he's a regular? Oh.. he's.. performed a lot... with them... OK.. so, I still am new at this TMBG thing. I never heard of Curt Ramm, but he apparently drove far to be on the show. His performance amped up a lot of songs, so I'm glad he was there.
Some things I noted were was how Flansy came out in the second show without some suit and jacket he was wearing-- I THOUGHT he would be hot before! Thank god, there's no way I'd wear a suit on stage with the amount of fun those guys have.
They seemed a lot more at-ease at the second show. I was glad.
Speaking of fun and moving on stage, I remember some awesome moves Danny was putting on. He was in front of Marty near the end of the setlist. (Istanbul?) He struck some awesome, slightly-leaned over pose, and impressed. Dunno if I managed to catch it on camera.. :( He even jumped from the slight ledge Marty's drum set rested upon, to the stage below. He aced the landing on that one. :D
The fun the guys had with Spy was pretty good, too. I dunno if they do it often, but it fit the whole ending Spy normally has.
I didn't mention it on the A-M listing, but Flansy messed up some of Spoiler Alert at the A-M! He nailed for this showing, too.
Linnell began introducing one song, I think, as, "This song has been popular on iTunes.. I think it's because of the title." (Me: "OMG! The Statue Got Me High!"), JL: "Here's 'When Will You Die?'". I was glad nonetheless, of course, but I now realize the breadth of their repertoire..!
I was also glad to hear Old Pine Box, When Will You Die, We're The Replacements, and Take Out The Trash. I dunno, they were spectacular and magnificent.
These shows were the first ones I had ever seen which involved Battle For The Planet Of The Apes.