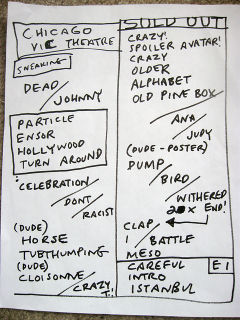 Dan Miller was not present at this show.

There was a proposal near the stage after the show, as everyone was trying to get set lists. Very cute, she said yes.

The Spoony Bard's overly nit-picky-way-too-long-because-he-is-stuck-in-his-cublicle-and-the-phone-isn't-busy-today-at-work review of the show:

I'll preface this by saying I love this band, and they are a GREAT live band. I have seen TMBG about 20+ times in as many years and I've never had a bad time. This show was no exception but if I'm going to compare this one to my other experiences it ranked average at very best.

Call me crazy but I felt like the band didn't seem too into it on this night. They seemed like they just wanted to get through the show or like they were preoccupied or something. The set list seemed poorly managed with respect to song placement and the overall audience energy level. Looking at this set list it seems like it should have been played in reverse. With the exception of the randomly inserted cure-for-insomnia called "horse w no name" and the fun but long-anticipated "tubthumpin" cover it was overall pretty standard fare. That is secondary though to the fact that to me it just kind of felt like they were phoning this one in.

On the plus side it was really cool to see Linnell play clarinet again as it's been a while since I've seen JL w a sax/clarinet, even if it was only for one song. Also, to their credit I didn't even notice that Danny Miller was absent until the the very end when they did Constantinople - I'm so used to hearing DM do the into on acoustic that it was only at that point that I suddenly realized he wasn't even there to play it. If someone had told me he wasn't there before the show started I would have expected the whole show to sound odd as I'm so used to seeing him now, but that wasn't the case at all.

For me it's always the highlight of the evening hearing them pull one random one out of the vault. Hearing them perform "Turn Around" was no exception to this rule. It was awesome. I hope they never stop putting a random classic gem into each show, in fact I wish it was more but I'll take what I can get.

Oh also before I forget - the wireless pad & pen effect thingamabob that Flans "played" during Lie Still LB was f'ing awesome - I've never seen that before.

The puppets singing into the camera for "Spoiler Alert" is a brilliant way to perform that tune and a perfect reminder of why this band is so great live but Flans is showing his age when he so desperately wants to use the term "epic fail" and it just seems kind of arbitrarily thrown into a bologna sandwich bit; "Sponsored by bologna sandwiches that are epic fail". Huh? It felt awkward when he tried to use that phrase like as if my dad was trying to pick up on some new lingo. It's a minor detail and I feel like a douche even mentioning it but for me it was significant because it was actually very distracting from an otherwise really clever break from the show. He just...kept...saying...it. Was there an inside joke about bologna that I wasn't getting? Did Danny Miller eat a bologna sandwich that spontaneously caught on fire and burned his face and as a result he was unable to appear at tonights show? If such was the case then JF's use of the term "epic fail" was clearly appropriate and I apologize, but if he keeps shit like that up I'm going to start calling him Grandpa.

People vs. Apes? Oh, right. This is the bit that was already tired when they were still doing it in the late nineties. At least back then it made sense in the show as it provided a great segue to showcase how incredible they are at improvising material. On this night it just felt like a waste of time. I'd rather hear another song dudes!

JL basically had the accordion for a minute at the beginning then he was married to the keyboard for the rest of the night. Also not a big deal, it just goes along with the overall "meh" feeling of the night. It felt like wasted potential. Everyone freakin loves seeing JL jam out on the squeeze box and he never really did.

Here's the big problem I have...not just w this show specifically but the show in the past few years. It just so happens that this night was a shining example...

I've been a fan so long and I get really peeved when people compare TMBG to Weird Al or call them a novelty band. "Oh they're the ones that did that song about a Particle Man, right?" Well I'm really left scratching my head when yet again they play "Alphabet of Nations" AND/OR "Clap Your Hands" in favor of their numerous cleverly written masterpieces. They've got the crowd going, we're rocking...energy building...AND...! Here's a song written for toddlers everyone! Awwww....

It's really hard to defend them against the "novelty band" nonsense when I take someone to a show telling them what underrated songwriting geniuses J&J are and suddenly we are learning our alphabet. In a rock club.

It's been my longest break between TMBG shows (about 2 years) and I was really hoping going into this show that they had finally retired the kids songs from the "adult" show. Why would they ever pull these out unless they are performing for either toddlers or for Disney executives? I kind of understood back when the kids music was a new thing for them, but enough already! It's been like SIX YEARS since ABCs came out and even longer since "NO!" TMBG Kid-songs awareness is at an all-time high. We don't need to hear the alphabet of nations at every show. I cannot recall a show where these songs were "crowd pleasers" but despite that sad fact these tunes STILL somehow manage to be staples of every show. I can tolerate the 100th rendition of Constantinople because I know it's kind of like TMBG's "Margaritaville" and it will haunt them forever but with such an impressively huge selection of fan favorites at their disposal maybe they should consider a few other cuts before yet another rendition of Nations or Clap Your Hands.

One positive change is that when it comes to the kids stuff I must admit I am really glad we're not subjected to "Robot Parade" any more *shudder* but guys do I really need to sit through the goddamn alphabet and the (clap your hands) hokey pokey at every show now too?

I love this band so much, and I'm so grateful every year that they are still going and still touring at all, but when the the rock club is serving alcohol, the ticket was $30, and I've heard you both use the "F" word already can we go ahead and skip the kids tunes? Factory Showroom anyone? John Henry? Theres so much rarely heard GOLD out there just itching to get this crowd going.

During "Celebration" there was a dance contest. I won an album. So did three other people. The show was amazing. -FreakFlag