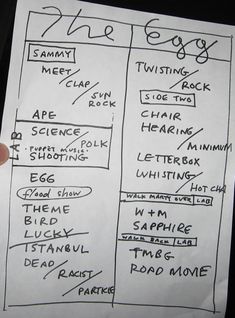 tl;dr Recap; We got lost, new Science songs, Flood show, John Flansburgh/Marty Beller/Danny Weinkauf acknowledged me, I get yelled at for filming an encore even though I've been filming the entire show. >_>

In Detail Recap; Yahoo! My feet are cramped, I'm deaf, and I should probably get to bed, but no. I need to tell about my experience.

So even with fully detailed Google Maps directions, we managed to get super lost from Middletown, NY to Albany, NY. The Egg was general admission, I was super upset and thought I wasn't going to get a good seat. But I got front row anyway!

If there's anything I need to complain about, it's that Flood shows aren't that special. A lot of room is taken out for other rarities, and you basically know the entire setlist, so there's no surprises. I also did not meet up with any wikians this time. I believe I saw Nerdy4ever95, but she was too far away for me to walk up and say hi to. And the fact that I got yelled at for filming The Mesopotamians, even though I've been filming the whole time. Boo.

Peter and Zoe Stampfel were the weirdest opening act in the world. I won't say they were bad, Peter was really funny and jumpy, but they were extremely weird.

I was standing over stage left, right in front of Marty's brand new Neil Peart-style Roland electronic drums. This allowed Marty to smile and nod at me during the new techno version of James K. Polk, probably because he remembers me from the Tarrytown incident. :D

I forget which song it was, but at some point in the show, somebody in the front apparently hit somebody else while dancing. Flansy threatened to stop the show if it happened again. What a great guy!

After James K. Polk, Dan Miller started riffing out Free Ride by Edgar Winter, and the Johns got back behind the marching bass drum (which was placed behind Marty's electronic kit), and performed a puppet show, in which the Flansy sock puppet awarded the Linnell sock puppet a platinum record for Flood. But then something else happened where the Flansy sock puppet told Linnell he was pirating something. I forget.

Before they played The Egg's venue song, Danny noticed that the camera used for the puppet show was flickering wildly. Flansburgh said it was good, and kept it going throughout the song. It was funny! Check it out here.

After Minimum Wage, someone started requesting songs, despite the fact that it was a Flood show. Flansy commented on this, and I soon yelled out, "Letterbox!!" Flansy looked at me and went "There we go!" Just like I did the last time Flansy acknowledged me, I smiled wide and thumbs upped him.

One thing I wish I filmed, during Hot Cha, Marty didn't hit the snare during the verses, which gave it a more cooler, jazzier feel. I loved it.

Near the end of New York City, a song which I really wanted to film, Danny Weinkauf smiled and nodded at me. I definitely know why, but it's not something I really want to tell about on TMBW. Let's just say he knows me somehow. ;)

All in all, wasn't the best show in the world, I was expecting rarer songs they played last night, like Where Your Eyes Don't Go, and Youth Culture Killed My Dog, but hey, you can't fit every song into a Flood show. Plus, I got to hear Dead, my number one favorite song off of Flood. I don't think I'll be seeing another Flood show for a while though. Nothing beats Tarrytown.

I thank you sincerely if you read this entire thing. I'll have videos/pictures/setlist up sometime soon. Now I need to get ready for a fun NYC trip tomorrow, where I'll be seeing TMBG again on Sunday!

P.S. The Egg DOES have fire exits. There were long lines to use the elevators to leave, so my parents and I took the fire exits out of there.

Best concert EVER! So at first, I got kinda lost getting to the egg... we fnally found our way inside... it's confusing with the interstate there and all... I got to the venue around 6:15 and I hung out in the hallway with a bunch of groupies.

Felt kinda out cause I was not wearing a TMBG shirt cause I didn't own one. And I felt like my style was cramped when I saw this girl wearing the same t-shirt i was wearing. (i was prettier!) Luckily, when they finally let us into the elevators, I bought a flood t-shirt and put it on. Strangly, we had almost the same glasses and stood next to each other... weird huh? And the dude next to buying shirt at the shirt was talking to me cause we were waiting for the cashier dude to get change. nobody had any fives. We talked about how this was my birthday present and first concert. Kinda cool. I felt like I fit in by now cause I could ramble on about any thing and not look like a freak.

The security dude called me a guy... I was aloud to come in... I am 14. Maybe I look young. But anyway, I sat down in the second row and watch the peeps set up the stage and stuff. I also saw Jason DeLima chilling out with some friends, i guess. I think he saw me cause he was looking at me. anyway, When they were done setting up, people jumped out of their seats for the opening act. I of course left my dad where he was and jetted toward the stage as fast as i could. I squeezed my way around people and placed myself just slightly to the left of where the keyboard will be moved to after the opening act.

The opening act was Peter and Zoe stampfel... It was bizarre... I could hardly understand him. But he was kinda funny. I think the only song i'd actually download on my ipod by him was the one with quote "Wave your ass in the air" unquote. That was a great song.

After that, It was like 20 minutes until TMBG came out. I had an upset stomach that day and also, I was having first concert jitters and I kept leaning on the edge of the stage and resting my head down to contain my dinner. Of course, the after affect of that Burger King gave me food poising so I'm sick right at the minute i'm typing this. I was fine during the concert though.

Then they came onto the stage. I was the highest pitch scream. I was so psyched cause I was just slightly to the left of the keyboard. And I better Jason DeLima was jealous cause I was also in front of Marty. Durng the first song, Meet The Elements, I was singing along and for about 10 seconds Linnell shared a glance with me for about 10 seconds. SERIOUSLY!! We made eye contact for that long! Heart was kinda melting there... Besides my hormones kicking in, Sounded like some peeps were hitting each other cause flans told them to stop beating each other up or something.

I sang along for the next songs, once and a while, linnell would make eye contact again... And when They did a little puppet show, It was so epic and funny. Kinda looked like Addison the sock from the lastest versions of the robot version puppet podcasts. Flans's had like some coffee cup or something (speaking of coffee cups, there was one next to the key board and linnell was totally drinking coffee!!) And Flans puppet awarded the linnell puppet and platinum award from the RIAA but then it was a court case for playing I think it was like garison keeler or somethin'... tres tres amusant... (very very funny)

Through out most of the concert, I screamed my face off. I have been practising my screaming so i was totally the highest pitched screamer and probably, hopefully, the loudest. During Particle Man, Flans stood right in front of me and I so totally wanted to like reach out and touch him. But I didn't, i was too scared. I seriously think they're gorgeouser in person... all the way. And during "We Want a Rock" I waved around a rock with red string tied around it. I don't think anybody saw it though. Maybe Marty. But I wasn't looking at him. And During the TMBG theme song, the confetti cannon went off and I got confetti stuck in my glasses and in my hair. I shoved a whole bunch in my pocket.

I liked the encores. I was confused why they ran off the stage twice. But I think it was the screaming of the fans wanting them to come back. I know I didn't want them to leave! I was like COME BACK!!! and screaming really loud in a high pitched voice, kinda like screaming you hear on rolled coasters, I LOVE YOU!!!! At one point, Flans was acknowledging the other band members, and when he mentioned Linnell, I squealed and They both looked at me and smiled. golly... I still wish the concert wouldn't end. If we all screamed louder, and If they took song requests, I'd still be there. Probably running through the parking lot trying to find their van. Any way, I was sad when the concert ended. I was going to hang out and get a set list or somethin', but I wanted to go home and we had to anyway. I was bushed!

I got lost trying to find dad's car. after all, it is the egg and it's easy to get lost! I hope that sometime in my near future, I can go to another concert. It was so amazing. They are so awesome and their concerts are so awesome. It was the best first concert I'll ever have. WOOOOOT!!

Everyone else did a great job recapping so I'm just going to insert my own comments, if that's okay. Fun show, except there was a very loud man behind me and he slurred his entire drunken way through Lucky Ball & Chain, which was the song I was most looking forward to hearing. He started yelling for them to play Dirt Bike and another person said, "Dude, they're playing Flood. SHUT UP." That person is my hero.

I was really sad when they moved the keyboard to center stage because I was directly in front of it, but Danny and Flans were jamming there frequently, so it was actually okay. I think my personal favorite part was when Linnell was trying to tell Marty how to play on the next song, and Marty finally said "STOP YELLING AT ME." The pirated Garrison Keillor bit was fun too - if you missed it, the RIAA (represented by the Flans puppet) accused Linnell of illegally downloading a bunch of Garrison Keillor audio tapes.

The Flood show was nice but definitely not something I'll be eager to see again. Like Flans (and JasonDeLima) said, there's not much room for surprises in a Flood show. I was so jealous reading the Ithaca playlist from Thursday night and really hoped they'd play some rarities. I guess I kind of got my wish with Cowtown, though, right?

Nerdy4ever95, I was right next to you. My friend was the one wearing the same shirt as you. I'm sorry you were feeling sick at your first show, but glad you were able to still enjoy it! There were actually a couple of other Wikians I saw, but since I'm a complete lurker on this site I felt weird going up and saying hi. Maybe next time.