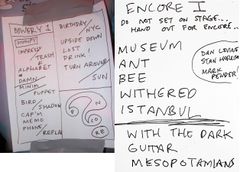 Advertised as the "current material" (2000s) show, with 16 of the 25 songs performed from this decade. Only one song was from Mink Car.

Flansburgh forgot how to play "Minimum Wage" and had to go over to Dan to see what he was playing to be able to play the little bit he did. There was a false start on "Puppet Head", where Flans said "No, we can't play this song now. It hasn't been long enough since we last played it." "It's Not My Birthday" was introduced as being a song written by Fiorello LaGuardia. Flans started the band intros by saying "You guys wanna do the "Computer" song and introduce everyone?" And then Marty kicked into it and Flans did the percussion vocals at the start. At one point, Flans asked them to break it down and everyone stopped. Linnell said "If by 'break it down', you meant 'stop'..." Flans replied, "No, I didn't, I meant, you know, make it sexy." Then they kicked into it again, with the percussion vocals at the start.

And perhaps the coolest part of the show was the spotlight on the mirrored disco ball over the stage for the choruses of "Withered Hope", speckling the stage and the audience with awesome bits of light. It was intense.

Also, during "The Mesopotamians", the cannons had not gone off and Flans was pointing at the one on his side of the stage frantically trying to get Linnell to realize it and he was unable to find the button before the song ended. So there were no cannons, even though they were set up.

Also worth noting is the fact that Flansburgh had perhaps gotten a bit too overzealous with his precious baby blue guitar. One of his fingers was cut by a string, speckling blood all over the white pick guard. Yes, ladies and gentlemen, They Might Be Giants would bleed for their audience.

The whole show actually started about an hour late. Dan Miller was pretty clearly operating onn zero sleep. Also, they had some tubes set up for some kind of pyrotechnics or confetti. It seems they had planned on using them during their closing number, "The Mesopotamians". I clearly saw Flans walk over to the tube on his side of the stage and point to it, looking questioningly at Linnell, who searched around his keyboard for a button and shook his head. There were also some issues with microphone levels. The reason Flans stopped "Puppet Head" was because there was a problem with the light show they planned for that song.
All that having been said, it was an awesome show. There were plenty of sweet lighting effects. And of course, they played well. And very loud. The Phone Calls From The Dead was very entertaining. As Flans walked off-stage, Linnell claimed that the connection was made via "Necro-Fiber". "Mayor Lindsay" continued on about how excited he is about the "general New York music scene", claiming to be a big fan of They Might be Giants, the Wu Tang Clan, and Simon & Garfunkel.
And of course the double encore was very pleasing. The horn section was great.