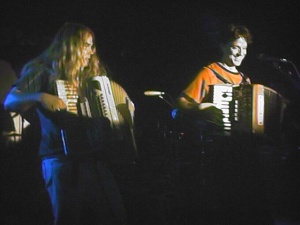 Jon Cunningham (born June 27), better known by his stage name Corn Mo, is a musician who performs with an accordion and an upside-down high-hat cymbal, placed strategically on the floor, which he hits with a drum stick jammed in his shoe laces. He is originally from Denton, Texas, and currently living in Brooklyn, having first opened for TMBG on 05-22-2003 at the Bowery Ballroom in New York City. He claims to have been inspired by They Might Be Giants to play accordion and become a musician. Sometimes he performs with his band ".357 Lover".

In 2004, he performed with They Might Be Giants on "Particle Man" (called "Particle Mo" at many of shows along the Spine On The Highway Tour). He also joined TMBG for a rendition of Focus's Hocus Pocus several times in 2005. His song "Lollipop" appeared in Podcast 7A.

In 2015, Corn Mo provided vocals for the Dial-A-Song (2015) track "No Cops". The band indicated that the song would be used as an introduction at future shows, though so far this has only happened once.