Why is there a long silence at the end of each song?

Sounds likely. The album was entering totally uncharted territory, of course. The people putting it together probably assumed people would take the first MP3 album and burn it to a CD, so they put in the gaps. Again, as above, all speculation.--Pittsburghmuggle (talk) 02:46, 5 February 2015 (EST)

The funny thing is that at the time this came out, most of the Windows software I knew thought it was proper to automatically insert 2 seconds of silence (as negative time) in front of every track on a burned CD, which resulted in a whole lotta silence on this one. Not sure what software burned without adding time by default but I was relieved when that became the standard years later. It's like one of the biggest anticipated consumer concerns when CD-R's came out was not enough silence between songs. -- Sonderling (talk) 09:00, 5 February 2015 (EST)

Did the Long Tall Weekend Promo CD actually exist? If so, tell me where it is.

There are at least two different LTW promo CDs. Here's what they look like.

The cd was also available for a brief period via eMusic. Very early on, if you bought the mp3s through eMusic, a lmt. ed. of the cd was sent to you by mail. Might this fact be incorporated into the article?

Actually, the "limited edition" CD available when you bought the album deal came with another eMusic-released album--the Working Undercover For The Man EP--not Long Tall Weekend. I got both LTW and the WUftM EP right when they came out, and I'm almost certain that there were no LTW CDs sent out by eMusic. Can anyone back me up on this? (By the way, I used quotes around "limited edition" because the Undercover physical CD was still available for purchase at tmbg.com the last time I checked, which suggests that its print run wasn't as "limited" as eMusic thought it would be. Did they overestimate how many people would buy the EP? Or did they just decide later to make more physical CDs?) ~Drew

I know this isn't directly TMBG related, but seeing the link to get the Long Tall Weekend PDF liner notes reminded me that, during the same time period in which I bought Long Tall Weekend, I also purchased a Phish live show called "Halloween 1990" from eMusic, which also had PDF liner notes. However, with switching computers and reformatting my hard drive, etc., over the ensuing years, I lost track of the liner notes for both albums. I got the LTW notes from here, but does anyone else here happen to have purchased that Phish show from eMusic and still have the PDF liner notes they could give me? I'd appreciate it if anyone does . . . ~Drew

I don't think the Long Tall Weekend promotional CD was ever available on eBay, or at least I never saw it on eBay.

I just won a copy on eBay. turned out to be a home made cdr so I'm not impressed -User:Ash 21 November 2011

Anybody know why there are two different covers? Which one is the correct (or I suppose "canon") one: the one in the PDF liner notes, or the one on the eMusic download page? — User:ACupOfCoffee@ 19:25, 13 September 2006 (UTC)

This image should be on this page somewhere, but I can't decide just exactly where: 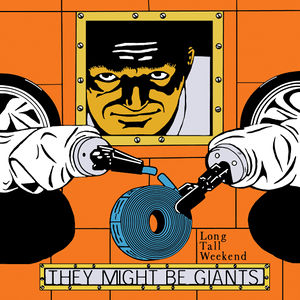 So you have to subscribe to a site in order to get this one CD? Damn...now that iTunes is out, they should at least release it on that! ~Anna Ng hears your words.

My McAfee SiteAdvisor is giving me a yellow "caution" warning when I go to eMusic. Just wondering, has anyone here ever had any problems with eMusic? The people on the McAfee site complain of e-mail spam and such. --HerRoyalFlyness 13:22, 18 May 2009 (UTC)

This is probably a really, really dumb question...but how do you assemble the liner notes?

The way I did, you just print off each page and cut it out. The first page of the PDF, put face down on a table or something. Then put page two face down on top of it. And so on. When they're all there, just fold it in half and staple or tape or do whatever. ~ magbatz 00:17, 18 January 2007 (UTC)

ever notice that the pressrelease claims that this is TMBGs 11th album? They must be counting Misc T and the demos, right? Johnocide

I'm guessing they're counting Miscellaneous T and Severe Tire Damage. As for the other two, no clue. Maybe Then: The Earlier Years and possibly Why Does The Sun Shine? (EP) because it's a standalone EP and not album b-sides. Akagi 20:52, 25 June 2007 (UTC)

Hey, has anybody bought this album from eMusic lately? And if so, what was the MP3 bitrate? The reason I ask is that I'm currently doing an eMusic trial, and I've noticed that the MP3s I've bought are higher quality (ranging from 158 kbps [VBR] to 215 kbps [VBR]) than they were when I first bought Long Tall Weekend (at that time they were only 128 kbps). So, if anybody knows if the LTW MP3s are higher quality now, please let me know! Thanks! ~Drew

if you mean the release party CDs, they are lossless-sourced. the radio promo cds, since the discs are the same, presumably contain the proper audio as well (though i have not opened my copy to confirm this). --

Hmmm, thanks. I'm in the process of gathering better sources for some of the stuff in my iTunes library, and the old eMusic 128 kbps mp3s are really starting to show their age. Guess I'll be on the hunt for a promo/release party CD now.--Ehsteve14 17:54, 11 December 2011 (EST)

I had heard that the LTW CDs weren't lossless. Are we sure they are? And for what it's worth, eMusic currently has better-quality LTW MP3s, though they're not lossless or anything. Drew 19:46, 11 December 2011 (EST)

Interesting. Could someone with an LTW disc check this out? I know they're selling the mp3s for this in the official TMBG store, maybe they'll expand their FLAC selection soon? So far, it's just Album Raises... and Join Us.--Ehsteve14 02:17, 12 December 2011 (EST)

the discs are most definitely both from an uncompressed source, or at least mine are, and i doubt that only some copies are. -- How often do copies pop up on sites like eBay etc.?[edit]

You may have seen me posting a lot about LTW lately and for that I apologize but not having a physical copy in my collection is keeping me up at night. Basically, how hard is it to find an actual copy of LTW? Is it worth looking for or is it a lost cause? I need closure! --Altermanncam 18:14, 17 May 2013 (EDT)

It shows up every few months on eBay; sometimes more frequently. Here's one that went for $26~ in March. For an item like this that you're always seeking, I'd recommend setting up an eBay alert for "Long Tall Weekend" (in quotes) and eBay will email you whenever another copy goes up. Good luck! -CapitalQ ♫ talk ♪ 18:39, 17 May 2013 (EDT)

I don't see this album on Their eMusic page anymore. Is it gone from the site that originally released it? — User:ACupOfCoffee@ 23:20, 4 February 2015 (EST)