Factory Showroom is They Might Be Giants' sixth studio album, and their last to be released on Elektra. 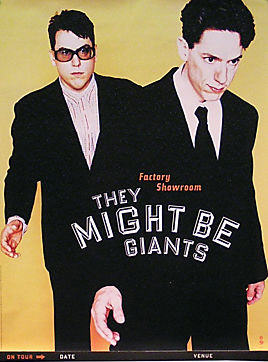 According to A Guided Tour Of Factory Showroom (a press release from the band), the album was mainly written during a series of shows at the Mercury Lounge in New York City and short east coast and midwest tours. The album was recorded in New York City, including at the band's personal studios. It was the second album that they recorded with a full band, which included Brian Doherty (drums), Graham Maby (bass), and Eric Schermerhorn (lead guitar). The album was also the band's first in which Pat Dillett worked with TMBG as their producer.

In addition to recording in New York City, the band was able to make a series of Wax Cylinder Recordings at the Edison Laboratories in West Orange, NJ. The band performed the songs in front of a small audience, singing and playing acoustic instruments into a pair of enormous metal cones, which fed the sound into a hundred year old non-electrical recording device created by Thomas Edison in the 1890s. One of these recordings, "I Can Hear You," made its way onto Factory Showroom.

John Flansburgh let fans know about the album a few months before its release in a rare direct communication on alt.music.tmbg on June 30, 1996:

The album is going to be out in October. The title won't be Chimp or At Large, and might be Boro-Wide or my current favorite Factory Showroom but we haven't really discussed that with anyone, so who knows what everyone can agree on. Songs will include "How Can I Sing Like A Girl?", "Certain People I Could Name", "S-E-X-X-Y", "Pet Name", "Exquisite Dead Guy", "Rat Patrol", "New York City", "I Can Hear You", and a bunch more I can't remember.

Two tracks Flansburgh mentioned in the June post— "Certain People I Could Name" and "Rat Patrol"—ended up being held over for Long Tall Weekend, but the tracks showed up on a cassette of the Factory Showroom recording sessions that was leaked to the public by an unknown source. Amongst the cassette's 22 tracks were also demo versions of "Older" and "On The Drag" still unheard elsewhere.

The back of a promotional flat

Factory Showroom only yielded one single, S-E-X-X-Y, which failed to chart on the Billboard Modern Rock Tracks. The album itself peaked at #89 on the Billboard 200 for the week of October 26, 1996, but only spent two short weeks on the chart before dropping off.