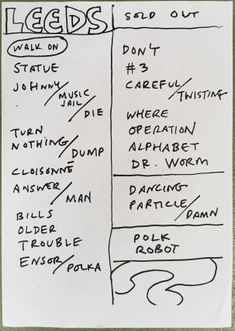 Dr John Oakland: I started getting into They Might Be Giants around 2004, and missed their show at the Leeds Irish Center. I got the show download, but always felt a little upset I hadn't seen the show. During that show they said that they only come to Leeds every 10 years or so, so they'd see us in 2014. Seeing this show complely made up for the missed show and the wait after that. Oh sure, I saw them 3 times in London and once in Manchester, but I don't live in those places, so this was the first time I'd seen them in my home city.

Awesome gig, with loads of classics and a few of the newer ones from Glean, the recent Dial A Song project etc., so I was singing along throughout! (Apologies to anyone within earshot!)

Flans had 2 Indian meals in a row today, including a breakfast of chickent tikka masala "Fortifying, satisfying"

If a song is in the key of A, it's the same key in another country. Unless it's in Australia where it's an upside down A like that symbol used in logic.

TMBG want beefs with the remaining members of Destiny's Child (not Beyonce or Kelly Rowland, who was the nice one)

If you wear the word THEY on your forehead to a gig in Manchester, people may recognise you just over 2 years later, but be unable to find the picture they took with you (maybe that's just a personal one)