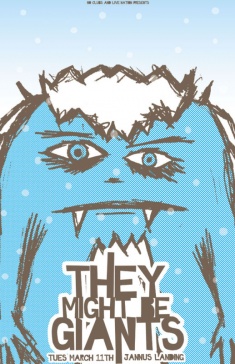 So this was my first show since and I was so excited that right when I got out of school I rode my bike directly from school to the Jannus instead of just going home. I was so anxious that not only did my hands along with the camera shake when I saw the tour bus, but I felt like puking while waiting for my mom to come. Next to me was this lady who was like "Oh my god are they in there? I'm gonna miss the concert but still, I wanna bang at the window!" I know, weird.
When we arrived, they were doing the sound check thingy, like, they played XTC vs. Adam Ant and some dude was all "Oh em gee yeah they seriously played Frankenstein!" ....Whatever. Anyway, I met 2 other TMBG fan peoples but aaaaaaaaaaahh I am not going to reveal who they were because it was so embarrassing how I met them and I'm such an idiot and every time I remember it I just regret it along with other events that happened and all the jealousy that's another story well ANYWAAAYYY when Flans came out from the gate it was like seeing fucking Steve Page or something, because they look a like and it was that exciting. Then I saw the Dans go to the coffee bakery, like they went to eat bread or something. Don't ask me, I don't know what they do. I went back to my bench area place and saw Linnell riding his bike right past me. I waved at him, but he didn't respond because he's afraid of girls. And after he passed me, I noticed his smile and I thought "Dios, el tiene la boca de un cabra!" (I'm half-Mexican)
Oh and there was Flans near me too, but he was pretending to talk on the phone and too busy trying to look all important and stuff, he had no time to talk to us. okay, so when the gates FINALLY OPENED, I listened to the radio that came from the courtyard even though it sucked. Then a little after that, Oppenheimer came out with all their vocoders and loud as hell airhorn thing. I recall Shaun saying that the fact that this dude yelled 'FREEBIRD' was totally lame in his book. Someone said 'potato' cuz that's just clever.
When tmbg came on stage, Flans came out and said "I forgot my guitar!" and went backstage. Then when they were playing I was taking a billion pictures. I aslo saw Frank what's his name (his last name sounds like this pasta I ate last night), he was good. I was very close to Linnell, and he wouldn't stop looking at me! Every time he looked at me, I was making faces at him going "nyaahh *sticks tongue out real far* LALALALALALALA!" and he made a face like "wtf kid?" apparently I made myself look too much like a dumb dumb. They played I Love To Sing in Particle Man, that was cool. I also remember this huge loser who threw his foam finger at Flans but luckily he dodged it and started cussing. He said "Okay..WHO THREW THAT?!? The thing you should do before going to these shows is to remind yourself not to throw shit at us" and Linnell said "Yeah even if you're trying to be nice we don't want shit thrown at us" and Flans said "If you throw shit at us, we won't come back, and we'll throw shit AT YOU!"
Then Flans was telling a boring story about whatever (yet people were laughing) and I noticed Linnell changed into a sweater! Wtf, it was so hot outside I rolled up my jeans! Okay, enough of that, then I heard a guy yelling at Linnell about something, I couldn't tell. I noticed that he called him 'Linn-ull'. When I became a tmbg fan in 2006, I used to call him that. So I sang along to almost all of the songs except One Dozen Monkeys, I didn't know it too well at the time. We also did the Ana Ng dance, and I was totally off I messed up the whole thing (go me). And then the confetti, I was like, really trying to catch them in my hands, like snowflakes. I also remember this one part before time when Flansburgh said something about Florida having 'phoney baloney credit cards' Yeah really dumb. You know what's also dumb that happened? Flans said "That Atari thing is rebuilding itself!" John John John John IT'S CALLED THE ATARI 2600 MY FREAKING GOD! Wow, and I totally said that in my head when I heard him say that.
After the show, I didn't get anything because I hate standing in line for stuff, it makes me anxious. So I left with nothing but a foam finger, and had to go directly to bed, my mom said I gotta be in bed. I was gonna anyway, it was 10:50pm when I got home. I'd like to go to another show but It'll probably either be in St. Pete again since I live there or wherever my mom feels like going.