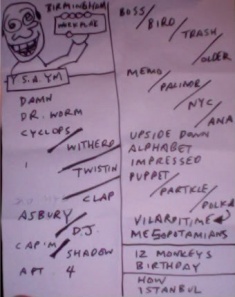 They Might Be Giants
— with Oppenheimer opening —
Workplay Theater in Birmingham, AL
March 9, 2008 at 8:00 PM

There are three words that can describe this show:amazing, personal, loud. Mainly loud, my ears are still buzzing from last night. So basically I went with some friends and my dad. We got to Workplay at 6 and waited inside. There inside a girl had drove from Nashville being told tickets were still on sale, they had really sold out. We felt bad for her but she got in. We waited and finally got front row on Flansburgh's side. The great thing about Workplay is that it's extremely small(maybe holds 400?) so even when you're on Flan's side you can see Linnell and the rest of the band with ease due to the small stage. After an hour of waiting Oppenheimer came on and play a 30 minute set. I love these guys ever since I bought the album and it was nice to know the songs(they did play some new ones). My friend grabbed the Oppenheimer set list so he should be uploading that here. The road crew for TMBG came out and set up. They threw out some foam fingers, I got one and my friend who was next to my other friend got one. My friend in the middle was not to happy about this. After about 30 minutes of setup the lights dimmed a little and suddenly the horn intro came over the PA. A couple people clapped, but it seemed the majority of people didn't know what was happening. I let out a loud "YEAH!" which then more people realized. The drummer came out first, then Danny, followed by Linnell, Dan who started the riff to Damn Good Times, and finally Flansburgh. The set was awesome, much better than Atlanta. Maybe one day I'll give details but that day is not today. Oh my friend who got the foam finger and I got set lists and my friend who hadn't gotten anything got Flansburgh's pick. Good for him considering he is a guitar player.