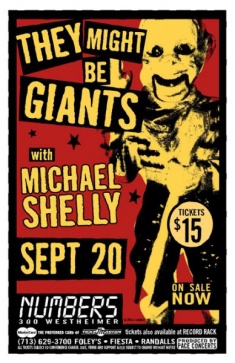 They Might Be Giants
Numbers in Houston, TX
September 20, 1998

Review by John David Crafton:
I must say, I totally enjoyed myself. Lots of jumping and stuffs, it was aWeStRaNoMoNoUs!

The band contained the Johns (of course), three Dans, and no Jim, to my disapointment. Oh well, better luck next time, don't you think?

Opening act: Michael Shelley. I liked the guy, I don't see why some people don't. He's a good performer, and a great musician.

They started with the Dans playing the STD theme. After Jack and the Professor got on stage, they played, to my surprise, Subliminal. I had told my dad earlier that they weren't going to play it, but they proved me wrong, placing it second. Well, you can't always be right, right?

They played Particle Man next, Linnell sang Kumbaya (sp?) towards the end. Next was New York City, followed by Whistling in the Dark, in which Flansburgh played a marching bass drum, much to the crowd's delight.

Next came First Kiss, They Got Lost, Your Racist Friend, and Dr. Worm, the one and only time they played it. Mr. Linnell proceeded to tease the crowd, as we were singing along, he decided to, um, lengthen his rests, and change a few rhythms, just to keep us on our toes.

She's Actual Size was next. Flans sang the end in falsetto, a feat I could not reproduce. I tried to do it along with him to no avail.

In Battle for the Planet of the Apes, the people won, and I couldn't sing along to the next song because of it (me screaming).

Next was Twisting, followed by the Famous Polka. In the Polka, there was a Drum solo, and Flans let the crowd touch his guitar. I was six inches away from it, I couldn't quite reach it. "So close, yet so far away."

Then they played Mammal, and a new song called Working Undercover for the Man. They moved She's an Angel up to next, b/c a loud female was screaming for it. Flansy played a black guitar. Well, I guess it goes to show that if you're loud enough and you ask early enough, you can get anything.

Afterwards, they played S-E-X-X-Y, and then Shoehorn With Teeth. The crowd went wild every time Dan hit the glockenspiel, a total of three times.

Next was Spy. In the improv session, they played Mr. Tambourine Man and Here I Go Again.

Then I am not Your Broom, I Palindrome I, Why Does the Sun Shine?, Older, and The Guitar. I jumped higher during the Guitar than any other song.

No One Knows my Plan came next, and a conga line formed without the help of Flansburgh. I would have joined, but I would have lost my spot close to the front in the process.

Next they played James K. Polk, then Istanbul (not Constantinople) with an excellent guitar introduction done by mister Dan Miller. Towards what seemed like the end of the song, They seemed like they got a second wind, and made it much longer than expected. Then, they turned off the lights and left the stage...

The crowd chanted We Want John for a solid five minutes, and then They came out with the puppets. Yes, they were singing Exquisite Dead Guy. I did notice, however, that the Johns were not singing, which leads me to believe that they recorded it earlier to play it then. I can't be sure whether or not the band was playing, though. My dad said he thought this was the low point of the concert, but what does he know?

Birdhouse in your Soul was next, much to the crowd's delight.

They ended with Dig my Grave, which I proceeded to head bang my way through, using my hair as a weapon against the back of the guy in front of me.

I can remember one time during the show when they played the end of This Ape's for you, but I can't remember exactly when that was.

A few times during the concert, I felt like Linnell was staring at me, but I'm probably just paranoid. I do know that he was looking in my general direction, though, so I wasn't totally off base.

For the majority of the concert, Flans played either a red or yellow guitar, except for She's an Angel, on which he played a black one.

I met Carey Carter, who we from cowtown all know is a cool guy, about 45 minutes before the concert, standing in line, wearing his Superman t-shirt and blue jeans. I was wearing a button up black shirt and black jeans.

After the concert, I bought myself a grey t-shirt with green bugs and They Might Be Giants in red, which I am wearing right now. The concert was about 4 hours, and They played about 2.

I got home at around 3 this morning, and went to sleep at 3:30. I woke up an hour and a half later, at 5, for morning marching band practice. I've been extremely energetic all day. I guess I'm still on a high from the concert, or something.

So, that was my first live TMBG experience.

Note to reader: this review was written the day after the concert, and sent to my friends in an e-mail. My only notes were a little piece of paper on which I had written a set list.

Review by Rhonda:
picture me huddled under a florescent light next to a six foot speaker, writing down every song they played with a red pen..(the same color as the light, so it was hard to see what i was writing) nonetheless... i was able to decode it all ,and now i hope that all my hard work will be a justice done to all those tmbg fans who ,.. well maybe wanted to know what they played at numbers/.. i was unable to grab the actual set list, because somebody had already run off with it... but i ass ure you mine is just a s accurate, and i even included a few quotes and other odd things. enjoy! 1. subliminal 2. particle man...... "kumbaya"... eerie particle man 3. New York City--J.L> relates the story of meeting a make-up artist while on tour.. who asked him what he thought about the Star Report in the newspaper...Linnell thought he was talking about Ken Star's report on the Clinton scandal..and started to say that he thought the whole thing was a big mess, and pretty ugly.. that he couldnt believe they printed it in the newspaper.. you know cause it's pretty long...and well the make-up guy said: "oh...but i thought you were into astrology?..." nobody got the joke for at least 8 seconds. : ) 4. Whistling in the dark -- J.F. actually played the big strap on bass drum, inching his way as close to the audience as possible, and nearly tripping over a few amps. 5.Severe Tire Damage Theme--J.L talked to the audience about watching the Different Strokes marathon, and didnt understand.. 6. First Kiss 7.They got lost 8. Racist Friend 9.Dr. Worm-- 10.Actual Size --J.F. sings the end in a falsetto 11. "people vs. Apes"...as usual people win. 12. Famous Polka 13. Mammal --J.L.." welcome to detention with tmbg..".."stay after tomorrow." 14. a special unreleased giant song..as they put it: "not on any record, cd or tape anywhere.." called " going undercover for the man" ---> a song all about working as federal agents in the guise of a rock band.. i believe. 15. She's an Angel (by special request) 16.S-E-X-X-Y J.L. "for the ladies" J.L. did some starnge keyboard aolos in this version, reminescent of the x-files theme. 17.(after sound check... now with the whole Rythm Section) Shoe Horn... with Dan Hickey on the electric Glockenspiel (always a crowd pleaser) ....J.L. (in reference to Dan's... adroit(hehe) GLockenspiel playing: ) "beaten but not defeated... he will meet any glockenspiel anytime..anywhere!" 18 Spy --J.F. interjects his own impromptu lyrics the wiles of which were comparablle to scratchin d.j.'s ... also with a wierd "wheee " chorus... ... suddenly breaks into Dillans Mr Tambourine Man... J.L. directs impromptu experimental end instrumentation. 19. Broom --J.F. administered the "broom" 's lyrics 20.I, Pallindrome, I 21 Why Does the Sun Shine 22. "Older" ..a show melody 23. The Guitar -- J.L. was heard to say into his mic/keyboard hook-up : " This shit is on fire!" 24. No One Knows My Plan (conga line) 25. James K. Polk --J.F. " there's some controversy about using paper confetti canons being against regulations, circulating.. but we're going to do it anyway." 26 Istanbul 27(encore) Exquisite Dead Guy (w/ puppet heads) 28 Bird House 29 Dig my Grave -- J.L. "see YAWL later.." END

p.s. additionally.. (although i forget during which song..most likely spy) Flansburgh held out his red guitar for everyone in the front row to play....in reference to the mad throng of hands that issued forth linnell said: " i can tell you guys like us for our music.."