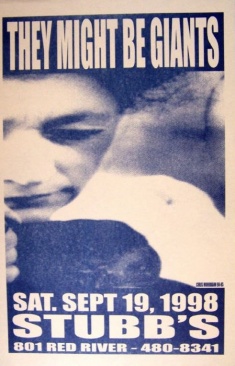 They Might Be Giants
— with Michael Shelley opening —
Stubb's in Austin, TX
September 19, 1998

Stubbs Barbeque is an outdoor venue, a steamy dirt pit in the middle of downtown Austin. The show began on time and the sun quickly faded, but summer heat bore down on the stage and audience. The band mentioned the conditions several times. By the end of the set, humidity and spilled beer had created a thin layer of mud under everyone's feet. A field of muck splattered in tempo as the crowd jumped, and then landed, in unison to the chorus of Dig My Grave.

The band was promoting a live album, and the set list played a bit like that of a greatest hits tour. They previewed the country-tinged Working Undercover For The Man as well as Older. But songs generally came from their back catalog, including the revised (is "Jazzercized" the word?) version of She's Actual Size, which featured an angst-ridden vocal from John Flansburgh on bended knee.

The band also debuted I've Got A Withered Arm, a grinding rock song Flansburgh described as "a work in progress." The germination of the lyric was almost certainly the previous evening in Dallas.