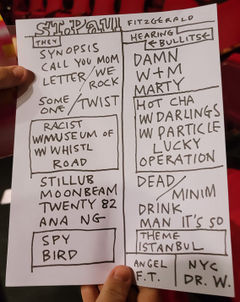 On the setlist but not played

Quick note before I post any further comments about the show. Apologies to the people directly below the lower left opera box that I was in. At some point I noticed under the thick wood railing of said opera box there was a loose bent staple in the bottom. I saw this as a potential finger prick for someone not paying attention. I proceeded to twist out the staple which I will admit was wedged in pretty good. As I got the confounded staple free, it fell out of my hands right away with the extra force and effort required to lodge the staple out. I can only assume as this was a sold-out show that the staple probably landed on someone's head. Full apologies if that staple caused bodily harm in any way. Hopefully it didn't impale you. ......short story over

As for the show itself. I had awesome seats see story above so was able (If I wanted to) to be able to jump and land stage left. Some highlights of the show. Dan Levine and Mark Pender go-go dancing during "Call You Mom" seeing Dan Miller perform the Damn Good Times solo in the Opera Box exactly across from me. Hearing Drink! complete with audience participation of the top two balconies and opera boxes singing Drink and the lower-level singing Drink! right after in quick succession. Overall I was pleased with the variety of other songs I heard compared to the First Avenue show the night before.